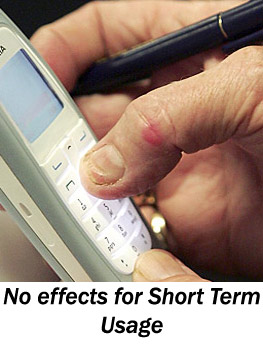 Sometime ago, we had reported about that just ten minutes on a mobile phone could cause cancer. But now a new study has found that using such gadgets does not cause biological or adverse health effects in the short run.

The finding is based on the conclusions drawn by The Mobile Telecommunications and Health Research (MTHR) Programme – UK’s largest investigation into the possible health risks from mobile telephone technology carried out over a period of six years by boffins led by Professor Lawrie Challis, Emeritus Professor of Physics at The University of Nottingham.

The researchers found that not only did studies on volunteers show no evidence that brain function was affected by mobile phone signals or the signals used by the emergency services (TETRA), but that the unpleasant symptoms experienced by sufferers were the result of exposure to signals from mobile phones or base stations.

Professor Challis, Chairman of MTHR, said that the results were “encouraging”.

“This is a very substantial report from a large research programme. The work reported today has all been published in respected peer-reviewed scientific or medical journals,” he said.

“The results are so far reassuring but there is still a need for more research, especially to check that no effects emerge from longer-term phone use from adults and from use by children,” he added.

However, the researchers stressed that the conclusion was only for short-term mobile phone use, and not long-term use.

Professor Challis said that the possibility that mobile phones might cause cancer in the long-term could not be ruled out. However, as studies have so far only included a limited number of participants who have used their phones for ten years or more, more research needs to be undertaken to prove this.

“We cannot rule out the possibility at this stage that cancer could appear in a few years’ time,” the Daily Mail quoted him, as saying.

“There is no way we can do that, both because the epidemiological evidence we have is not strong enough to rule it out and because most cancers cannot be detected until 10 years after whatever caused them.

“With smoking there was no link of any lung cancer until after 10 years,” he added.