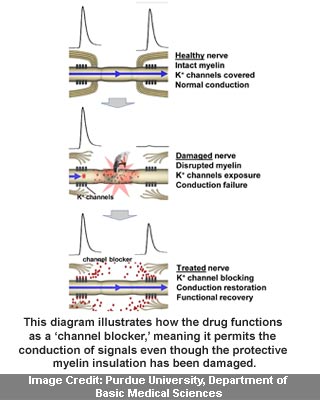 Researchers from Purdue University have shown how an experimental drug may be able to restore the function of nerves damaged in spinal cord injuries. Apparently, this can prevent short circuits caused when tiny ‘potassium channels’ in the fibers are exposed. Moreover, the chemical compound could perhaps be developed as a treatment for multiple sclerosis.

Since nerves typically are not detached in a common type of spinal cord trauma, called ‘compression’ injuries, the drug seems to offer hope as a potential treatment. It was estimated that multiple sclerosis affects more than 350,000 people in the United States and 2 million worldwide.

Riyi Shi, a professor in Purdue University’s Department of Basic Medical Sciences, School of Veterinary Medicine, Center for Paralysis Research and Weldon School of Biomedical Engineering said that, “Compression is responsible for most spinal cord injuries, including many resulting in paralysis. Since the nerves are not severed, this type of drug represents a potential golden opportunity to treat spinal cord injuries.”

The experimental compound known as 4-aminopyridine-3-methyl hydroxide was noted to have shown to restore function to damaged axons, slender fibers. Supposedly, these slender fibers extend from nerve cells and transmit electrical impulses in the spinal cord. The researchers were noted to have subjected spinal cord tissue to stresses that mimic what happens in a compression injury, which stretches nerves. Later, they appear to have treated the damaged axons with 4-aminopyridine-3-methyl hydroxide.

The compound is known to be a derivative of the drug 4-aminopyridine. Moreover, it seems to be used mainly as a research tool and also to manage symptoms of multiple sclerosis. The axons of each nerve appear to be sheathed in a thick insulating lipid layer called myelin. This layer may perhaps enable the transmission of signals without short circuiting, similar to the insulation adjacent to the electrical wires.

Spinal cord trauma seems to damage the myelin sheath thereby exposing ‘fast potassium channels’ that are embedded in the axons. Also, they appear to be vital for transmitting nerve impulses. The researchers confirmed earlier circumstantial evidence suggesting that injury may cause the myelin insulation to withdraw. This could possibly expose the channels and impair signal transmission. Furthermore, laboratory and imaging techniques were noted to have revealed the exposed channels in damaged axons.

The researchers were believed to have made use of a sophistic laboratory technique called ‘patch clamp’ to measure signal conduction. They discovered that 4-aminopyridine-3-methyl hydroxide seems to be a ‘potassium channel blocker.’

The research findings confirmed that the compound appears to prevent the exposed channels from leaking electrical current. In addition, it may enhance nerve conduction in segments of the damaged spinal cord. Shi claimed that the compound could make it potential to avoid spinal cord damage by enabling axons to transmit signals as if they were still sheathed in myelin.

Nerves are known to transmit signals via a series of rapid electrical pulses, or ‘action potentials.’ For proper nerve function, the time gap between pulses should be as short as possible. However, 4-aminopyridine has been revealed to lengthen the gap, or ‘refractory period,’ between pulses.

The researchers found that 4-aminopyridine-3-methyl hydroxide apparently restores function without affecting the refractory period. Therefore, the damaged nerves seem to perform more like healthy nerves as compared to those treated with other drugs. Another essential advantage of the latest compound is that it appears to be about 10 times more strong than 4-aminopyridine. This signifies that lower doses could be used to decrease the possibility of serious side effects.

Since myelin too is damaged in multiple sclerosis, the same drug may perhaps be used to restore nerve function in people suffering with the disease. Because the novel drug can be used in lower doses, it could be more effective in contrast to 4-aminopyridine in treating multiple sclerosis.

The findings of the research have been published in the Journal of Neurophysiology.