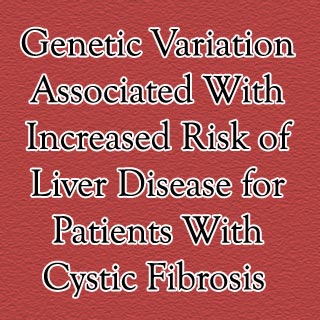 A genetic disorder which is known to be a hereditary disease of the secretory glands, as well as the glands that makes mucus and sweat is called as cystic fibrosis. A genetic analysis now points out that a particular gene variation in patients suffering from cystic fibrosis could considerably add to their possibility of developing severe liver disease.

The nine variants in five genes which were earlier studied in CF liver disease were supposedly examined by Jaclyn R. Bartlett, Ph.D., of the University of North Carolina at Chapel Hill, and colleagues. They wanted to verify the relationship between non-CFTR genetic variations and CFLD. The preliminary study apparently evaluated genetic variations in the candidate genes in about 124 people with CFLD and in 843 control patients without CFLD. The second study claimed to test these findings in diverse populations of about 136 patients with 1,088 without CFLD.

Of the 5 genes studied, the authors mentioned “Only the SERPINA1 Z allele [an alternative form of a gene] was significantly associated with CFLD and portal hypertension. This polymorphism is relatively uncommon in CF [about 2.2 percent of patients with CF are carriers], but the odds ratio for association with severe liver disease is relatively high [about 5 times higher] for the contribution of a genetic modifier to a mendelian [genetic] disorder. Moreover, the estimated population-attributable risk among patients with CF is 6.7 percent. From a clinical perspective, a rare variant with large penetrance (such as the Z allele) may be more useful than a common variant with low penetrance in screening for genetic polymorphisms.”

The authors concluded by remarking that the identification of the SERPINA1 Z allele as the first marker for the development of severe liver disease in CF illustrates the possibility of identifying CF risk factors early in life, conceptually as a secondary component of neonatal screening after the diagnosis of CF is confirmed.