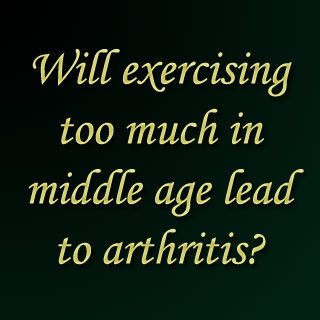 A latest study from University of California, San Francisco claims that too much of exercise can cause arthritis in middle-aged people.

The findings of the study have shown that middle-aged men and women who engage in high levels of physical activity may perhaps be unknowingly causing injury to their knees. Apparently, this can in turn increase their risk for osteoarthritis.

Osteoarthritis is known to be a degenerative joint disease that causes pain, swelling and stiffness. According to the Centers for Disease Control and Prevention, osteoarthritis seems to be the most ordinary form of arthritis. More so, it was estimated to affect 27 million American adults.

The UCSF study was believed to have involved 236 asymptomatic participants who had not stated earlier knee pain. These participants appear to have been enrolled in the National Institutes of Health Osteoarthritis Initiative. Also study participants were noted to have included 136 women and 100 men between the ages 45 to 55, within a healthy weight range.

Furthermore, the participants were divided into low, middle, and high-activity groups based on their responses to the Physical Activity Scale for the Elderly (PASE) questionnaire. PASE appears to be a typical test that scores an older individual’s physical activity level, based on the kind of activity and the time spent doing it.

“Our data suggest that people with higher physical activity levels may be at greater risk for developing knee abnormalities and, thus, at higher risk for developing osteoarthritis,” says Christoph Stehling, M.D., research fellow in the Department of Radiology and Biomedical Imaging at the University of California, San Francisco (UCSF) and radiology resident in the Department of Clinical Radiology, University of Muenster, Germany.

The study findings revealed that several factors are known to contribute to the final PASE score. However, a person whose activity level is classified as high typically may possibly engage in several hours of walking, sports or other types of exercise per week, in addition to yard work and other household tasks.

Later, MRI analysis by two musculoskeletal radiologists was believed to have indicated a relationship between physical activity levels and frequency and severity of knee damage. Specific knee abnormalities which may have been recognized included meniscal lesions, cartilage lesions, bone marrow edema and ligament lesions. Moreover, abnormalities could perhaps have been associated exclusively with activity levels and were not age or gender specific.

Dr. Stehling further said that, “The prevalence of the knee abnormalities increased with the level of physical activity. In addition, cartilage defects diagnosed in active people were more severe.”

The findings also suggest that high-impact, weight-bearing physical activity, such as running and jumping, could be worse for cartilage health. On the other hand, low-impact activities, such as swimming and cycling, may protect diseased cartilage and prevent healthy cartilage from developing disease.

They also indicated that some activities may possibly carry a higher risk of knee damage over time. The study authors anticipate for potential studies to evaluate the influence of low-impact against high-impact physical activity on disease progression.

The findings of the study have been presented at the annual meeting of the Radiological Society of North America (RSNA).