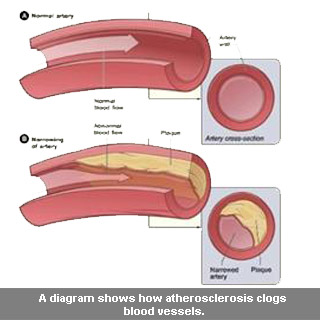 Rigorous physical exercise not only keeps us fit and healthy but also appears to protect us against dangerous diseases. Scientists from University of Rochester claim that fit hearts seem to thrust blood via arteries with larger force, which alone could activate responses that may guard against unsafe clogs in blood vessels.

Researchers apparently demonstrated that they seem to be rather close in comprehending each step in one flow-sensitive chain reaction that guards arteries. Every step appears to offer a chance to imitate the drugs with the established capability of quick, stable blood flow to open up blood vessels and prevent the inflammation and blood clots that appear to come with atherosclerosis.

Preceding research at the Medical Center and elsewhere had supposedly found out that two genes, Krüppel-like factor 2 (KLF2) and endothelial nitric oxide synthase (eNOS), are said to be switched on by blood flow force to annul atherosclerosis, but not how. The present research claims to have discovered for the first time that flow seems to be the reason for a structural variation in the enzyme histone deacetylase 5 (HDAC5), which in turn may impact whether the two vital genes are switched on.

Zheng-Gen Jin, Ph.D., associate professor of Medicine within the Aab Cardiovascular Research Institute (CVRI) at the University of Rochester Medical Center, and corresponding author for the research, commented, “Obviously we should all be exercising to get our hearts pumping fast, which increases blood flow force through our vessels with all of these molecular benefits. Beyond that, the designers of future therapies may manipulate HDAC5 to fine-tune the action of protective genes.”

The present research appears to be centered around a signaling procedure known as phosphorylation, in which enzymes named kinases apparently bind a set of molecules known as phosphate group to a target to turn life processes on or off. In cells lining blood vessels i.e. endothelial cells, the addition of a phosphate group to an HDAC5 apparently kicks it out of the cell’s nucleus.

To investigate whether blood flow force is said to stand for one the signals that seem to cause HDAC5 nuclear export, the team apparently designed a virus to attack the cells and trade out the vital building blocks that make feasible its phosphorylation using blood flow force. Weiye Wang, also a member of the CVRI and first author of the paper, supposedly developed the virus. He also fastened a fluorescent tag to HDAC5 in the mutated cells so the team may trail it as it moved.

What the team apparently discovered for the first time is that blood flow force could in fact cause the phoshorylation, and export from the nucleus, of HDAC5 in endothelial cells. Significantly, the team also appears to have discovered that flow, by eliminating HDAC5 from the scene, apparently compels it to separate from the molecule it generally straps in to the nucleus mainly myocyte enhancer factor-2 (MEF2).

When free, MEF2 is believed to impel the expression of Krüppel-like factor 2, which appears to need augments in the provision of endothelial nitric oxide synthase (eNOS). eNOS then supposedly builds more of the nitric oxide that informs muscles adjacent to arteries to unwind which seems to augment blood flow and lowers blood pressure. When cells were engineered with HDAC5 unable of being phosphorylated by flow, HDAC5 apparently on no account left the nucleus; thereby staying fixed to MEF2 and entirely obstructed the expression of KLF2 and eNOS.

Moreover, removing the capability of quick, stable flow to phosphorylate HDAC5 seems to have significantly destabilized a second lifesaving benefit of flow. It apparently averts white blood cells from gluing to the cells lining blood vessels, a premature, essential stride in the growth of atherosclerosis. Fatty diets supposedly causes cholesterol deposits to increase within arterial walls, deposits that white blood cells view as infections and zoom in on to impel inflammatory disease. By boosting KLF2 expression, blood flow force is said to avert adhesion molecules on cells lining arteries from hitching white blood cells as they drift by.

The team also apparently displayed via a chain of experiments that flow-induced HDAC5 phosphorylation could rely on the familiar calcium/calmodulin pathway. The team appears to hypothesize that the strength of flow could alter the form of calcium channels on the exterior of endothelial cells, which seems to facilitate calcium to dash into the cells and switch on calmodulin. This apparently fastens to an as yet unrevealed kinase that phosphorylates HDAC5.

Recognizing such an enzyme may finish the first drawing of a flow-sensitive, defensive signaling pathway. Jin’s lab has apparently zeroed in on calmodulin-dependent kinases as probable suspects, and is crafting experiments that could close down the genes coding for them to observe if that halts the phosphorylation of HDAC5 by flow. If that is the case, the team may try to monitor drug candidates that supposedly persuade the act of these enzymes.

The study was published in the Journal Blood.