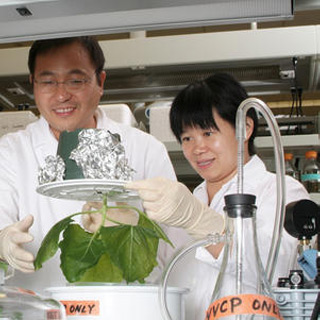 This study may turn out to be quite beneficial in finding out ways to arrest West Nile virus infection. A study author from Arizona State University, Qiang Chen with colleagues, claims that a novel therapeutic developed from tobacco plants apparently illustrated to capture the West Nile virus.

Qiang Chen is alleged to be the first to exhibit a plant-derived treatment to effectively fight West Nile virus following exposure and infection. Apparently, there are presently no accessible vaccines against West Nile, nor effectual therapeutics for human use, so the existing results appear to be a substantial progression and may present the best anticipation that the West Nile virus infection may be stopped, even numerous days following viral infection.

West Nile virus has apparently caused disease epidemics throughout the U.S., in addition to regions of Canada, Mexico, the Caribbean and South America. Older people and those with depressed resistance are said to be predominantly susceptible to West Nile, a mosquito-borne illness which may be the reason for likely lethal inflammation of the brain.

Chen commented, “The goal of this research was twofold. First, we wanted to show proof-of-concept, demonstrating that plant-made antibodies can work as effective post-exposure therapeutics. Secondly, we’ve sought to develop a therapeutic which can be made inexpensively so that the health care systems in developing countries can afford it.”

Apart from being economical, plants also provide other benefits. Mammalian cell lines could pose a threat of sheltering animal pathogens like viruses or infectious protein agents called prions, not seen in plants. Plants may also allow generation of pharmaceutical products to be effortlessly scaled up to whatsoever amounts are needed.

The study checked antibodies against West Nile virus resulting from mammalian cell lines and pitted their efficiency with those taken from plants. The plants used to generate the antibodies appear to be a relation of general tobacco. Approximately seven days following the release of antibody genes into plants, the leaves are said to be harvested, homogenized and purified to eliminate extraneous material.

The approach for gene insertion is to supposedly utilize the particular equipment of the tobacco mosaic virus and potato virus X (PVX) to transmit the genes of interest into the plants, where they may be expressed, thereby yielding a human monoclonal antibody called hu-E16. The gene expression supposedly arises in simply a week’s time, thereby making the generation procedure extremely capable.

The monoclonal antibody, once inserted into the recipient, fastens to a certain surface protein of the virus. That attaching site may also be the one utilized by the virus to connect itself to mammalian host cells, and once it is engaged, the virus’ cell-binding capability could be counterbalanced.

Cell-derived versions of this antibody have apparently already illustrated striking efficiency, thereby shielding mice from WNV-induced death even numerous days following infection. Chen’s study appears to display similar efficiency by means of tobacco-plant derived monoclonal antibodies. The outcomes in the groups of mice tested may be basically identical. The therapeutic is supposedly effectual in extremely minute dosages i.e. 50-200 micrograms and only one dose is necessary to remove the virus from a contaminated person’s system.

The efficiency of the plant expression system may be reliant in part on the optimization of the antibody DNA sequence, which seems to aid in ensuring an elevated level of expression in the plants.

The plan apparently allowed the group to set a record for the antibody yield generated by the transgenic tobacco plants i.e. an augment from around 500 micrograms of antibody for each gram of leaf tissue to about 800 micrograms for every leaf.

Since the monoclonal antibody therapeutic attaches to a preserved area of the viral surface, it could be effectual against a range of West Nile virus stains and probably against other flaviviral strains. If a person is in contact with a variant strain of virus differing in a few aspects from the antibody used to treat it, there may be a possibility in the case of the mammalian cell-derived therapy to in fact deteriorate the condition, via an effect called antibody dependent enhancement.

Chen is of the opinion that the plant-based antibody method may offer extremely effectual, cost-efficient therapeutics for other diseases, counting associated flavivirus infections like dengue fever and Japanese encephalitis, if the achievements in mice could be reproduced in humans.

One issue in treating a virus such as West Nile, which appears to aim the central nervous system, is that present antibody therapeutics are not able to trail the virus into its sanctuaries in the human brain, owing to the presence of the blood brain barrier. If this obstruction could be conquered, it may be feasible to generate therapeutics able to eliminate the infection even post 6 or 7 days, when a considerable quantity of virus seems to have colonized the brain tissue.

The findings were published in the Proceedings of the National Academy of Sciences.