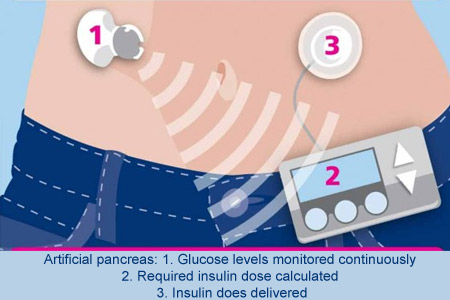 Hypoglycaemia or a ‘hypo’ probably occurs when the level of glucose in the blood falls too low. If left untreated, the person having a hypo can supposedly become unconscious after experiencing warning signs as the body tries to raise the blood glucose level. Some of its signs allegedly include feeling shaky, sweating, tingling in the lips, heart pounding, and irritability. Though very rare, hypoglycaemia can apparently pave way for coma, brain damage and even death. Well, Cambridge scientists have now found that an ‘artificial pancreas’ device can avoid night-time hypoglycaemia in adults with Type 1 diabetes.

The ‘artificial pancreas’ or closed-loop insulin delivery system may automatically manage a person’s diabetes. This device purportedly controls blood glucose levels by releasing insulin when alerted to high levels of glucose, and withholding it when levels are low. At present, people with Type 1 diabetes possibly don’t have to inject insulin several times a day or wear an insulin pump which releases the hormone via a cannula inserted under the skin.

Experts conducted two studies for examining the efficacy of the artificial pancreas in 10 men and 14 women, aged 18 to 65, who had used an insulin pump for at least three months. In the first study, 12 participants were monitored after consuming a medium-sized meal at 7pm. During the second study, the other 12 participants were analyzed overnight after consuming a larger meal along with alcohol at 8.30pm. As a result, a 22 percent improvement in the time participants kept their blood glucose levels in a safe range was registered.

Since half the time was spent with low blood glucose levels, reduction in the chances of developing both short term and long term complications appeared. University of Cambridge researcher Dr Roman Hovorka and colleagues presume that the artificial pancreas is more suitable for adults, children and adolescents. Additional investigations can be conducted to determine the seeming benefits of this device for those diagnosed with Type 1 diabetes.

The study was funded by the health charity Diabetes UK.