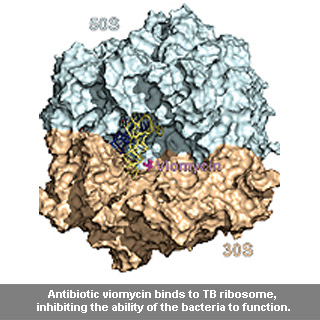 Tuberculosis (TB) is a general but fatal infectious disease that may usually assault the lungs but can also affect other parts of the body.A Yale study team headed by Nobel laureate Thomas A Steitz seems to have found how a family of tuberculosis-fighting antibiotics may battle the lethal disease, an outcome that may result in new ways to fight a treacherous budding drug-resistant type of TB.

About 9 million new cases of tuberculosis are apparently detected each year. Approximately 2 million people die owing to the disease in 2007 alone, as per the WHO. Public health officials are predominantly apprehensive about the emergence of widely drug-resistant tuberculosis, which apparently does not react to generally used antibiotics.

Supposedly, over half of antibiotics function by curtailing the role of ribosomes, the cellular protein-making machinery in bacterium like Mycobacterium tuberculosis.

The Yale team anticipates that by discovering precisely how present antibiotics obstruct activity in the TB ribosome, scientists may develop new drugs to battle resistant types of the disease. By means of technology known as X-ray crystallography, Steitzand his team define where the antibiotics viomycin and capreomycin attach, at a place between the big and small subunits of the ribosome. They observe that this binding spot may be near two locations where two other families of antibiotics seem to interrelate with the ribosome.

Identifying this configuration, it could be likely to craft an antibiotic that may obstruct actions of presently drug resistant types of tuberculosis and other infections. It was mentioned by Susan Froshauer, president and CEO of Rib-X Pharmaceuticals Inc., a New Haven-based biotechnology company.

The company has apparently already used the information of ribosome structure crafted by Steitz, a scientific co-founder of Rib-X, and other scientists to create a new generation of antibiotics to treat such infections as methicillin-resistant Staphylococcus aureus (MRSA). The company supposedly has four new antibiotics under development, two of which are apparently undergoing clinical trials.

The discoveries are published in the journal Nature Structural and Molecular Biology.