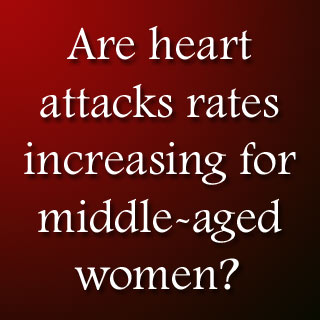 Heart attacks seem to have become more ordinary in middle-aged women over the past two decades. However, all women and particularly those younger than 55 may perhaps have recently suffered from a greater increase in their chances of survival following such a heart event as compared to men. Atleast this is what study experts from the University of Southern California and Emory University School of Medicine claim.

It was believed that middle-aged women have traditionally had a lesser overall possibility of heart events and stroke in contrast to men of a similar age. However, this recent study appears to show higher stroke rates among women than men in a sample representative of the U.S. population. Apparently, this revealed a latest phenomenon and raised the question of whether heart disease or heart attack was also becoming more common among women.

For the purpose of the study, Amytis Towfighi along with her colleagues was noted to have examined data from U.S. adults who were in the age group 35 to 54 years. Moreover, these adults appear to have participated in the National Health and Nutrition Examination Surveys (NHANES) during the year 1988 to 1994 that includes nearly 4,326 participants and during 1999 to 2004 which comprised approximately 4,075 participants.

NHANES is known to be nationally representative surveys which are conducted by the government. The study experts then evaluated how often men and women seem to have heart attacks and also compared their Framingham coronary risk score. Supposedly, this score is a measurement of heart disease risk over 10 years that includes factors such as age, cholesterol levels, blood pressure and smoking history.

It was observed that in both study periods, men who were in the ages 35 to 54 years seem to have more heart attacks in contrast to women in the same age group. However, the gap appears to have lessened in more recent years as heart attacks decreased in prevalence among men and increased in frequency among women. For instance, about 2.5 percent of men and nearly 0.7 percent of women were noted to have reported a history of heart attack in the year 1988-1994, whereas approximately 2.2 percent of men and about 1 percent of women reported in the year 1999-2004.

The only risk factor that improved among women was believed to have been HDL levels. Moreover, diabetes prevalence is known to have augmented among both men and women, possibly due to insulin resistance and the obesity epidemic in both sexes.

Amytis Towfighi, M.D., of the University of Southern California, Los Angeles, said that, “Although men in their midlife years continue to have a higher prevalence of myocardial infarction and a higher 10-year risk of hard coronary heart disease than women of similar age, our study suggests that the risk is increasing in women, while decreasing in men. Therefore, intensification of efforts at screening for and treating vascular risk factors in women in their midlife years may be warranted.”

In another study, Viola Vaccarino along with her colleagues was observed to have examined trends in the rate of in-hospital deaths following heart attack from June 1, 1994, through Dec. 31, 2006. Data seems to have been collected from 916,380 patients via the National Registry of Myocardial Infarction.

Viola Vaccarino, M.D., Ph.D., of Emory University School of Medicine, Atlanta, stated that, “A large part (93 percent) of this sharper decrease in mortality of younger women compared with men in recent years was because the risk status of women on admission improved compared with that of men. Such improvement may be due to better recognition and management of coronary heart disease and its risk factors in women before the acute myocardial infarction event, as suggested by the narrowing sex difference in previous revascularization (surgical treatment for heart disease).”

The findings revealed that in-hospital death rates seemed to have decreased among all patients between the year 1994 and 2006. However, it appears to have decreased more noticeably in women as compared to men.

Also, the reduced risk of death may perhaps have been largest in women younger than 55 years i.e. a 52.9 percent reduction and lowest in men of the same age i.e. 33.3 percent. The authors also found that the absolute decrease in the risk of death among patients younger than 55 was observed to have been three times larger in women i.e. 2.7 percent in contrast to men i.e. 0.9 percent.

The findings of the study have been published in the journal, Internal Medicine.