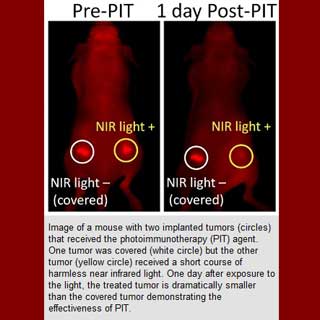 Light has been an interesting accomplice for experts in their tryst with lab experiments and researches. In yet another trial by scientists from the National Cancer Institute, a light-based therapy that seemingly enables objective demolition of tumor cells in rodents, without impairing the ambient tissues has been unfolded.

In theory, this technique may function against tumors in humans including breast, lung, prostate and leukemias too. The present photodynamic therapy doesn’t seem to be selective in its approach to cancer cells, thereby harming the surrounding tissues.

This new avenue is termed photoimmunotherapy, or PIT that utilizes light to swiftly and specifically kill cancer cells. A monoclonal antibody (MAb) that comprises a photosensitizer to detect proteins at the surface level of molecules was used for developing this method. The scientists believed that delivering the photosensitizer to cells targeted by MAb could destroy those cells after they have been exposed to near-infrared light.

For getting hold of an efficient photosensitizer, the investigators scrutinized many elements and stumbled upon a near infrared dye namely IR700 that looked the most favorable owing to its chemical attributes.

“The ability to join different MAbs to IR700 means that this technique might be used as a non-invasive guide to monitor the results of treatments. Although more testing will be needed, we believe this PIT method has the potential to replace some surgical, radiation, and chemotherapy treatments,” commented Hisataka Kobayashi, M.D., Ph.D., chief scientist in the Molecular Imaging Program at NCI’s Center for Cancer Research.

As per the outcomes of the mice research, the cancerous cells which got hooked to the complex MAb-IR700 in the presence of near-infrared light apparently pushed the targeted cells to death. Moreover, the cells devoid of cancer which did not cling to the complex seemed to be untouched. According to the researchers, even a single application of near-infrared light presumably caused significant tumor shrinkage.

The scientists concluded that the antibody doses for detection were substantially lower than those required for therapy. This method is likely to necessitate considerably lower doses of MAb as compared to amounts that are used for standard treatments. Also, the complex MAb-IR700 expels a small proportion of light that may be used to keep a check on the doses as well.

The analysis is published in the journal, Nature Medicine.