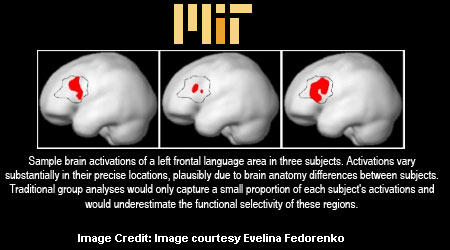 The human brain seems to complicate and confuse neuroscientists as they face a tough time using brain imaging technology. This technology usually helps understand what the areas of the brain, which are associated with language, are doing. A recent report by MIT neuroscientists seems to have claimed a new method, to analyze brain imaging data. They assure that this new method will help clarify, how our brain produces and understands language.

In order to conduct the study, patients with specific language deficits, like inability to comprehend passive sentences following brain injury were considered. The study voiced that different aspects of language may reside in different parts of the brain. However, utilizing the current neuroimaging technologies, the results have been argumentative and contradicting. It is assumed, that one reason for this inconsistency may be because most of the previous studies were dependent on group analyses. During these analyses, brain imaging data was averaged across multiple subjects. This could possibly invite statistical noise and bias into the analyses.

Evelina Fedorenko, first author of the study and a postdoctoral associate in Nancy Kanwisher’s lab at the McGovern Institute for Brain Research at MIT revealed, “Because brains differ in their folding patterns and in how functional areas map onto these folds, activations obtained in functional MRI studies often do not precisely ‘line up’ across brains. Some regions of the brain thought to be involved in language are also geographically close to regions that support other cognitive processes like music, arithmetic, or general working memory. By spatially averaging brain data across subjects you may see an activation ‘blob’ that looks like it supports both language and, say, arithmetic, even in cases where in every single subject these two processes are supported by non-overlapping nearby bits of cortex.”

Fedorenko believes, that to work around this problem first and foremost the ‘regions of interest’ in each individual subjects ought to be defined. The next step should be to investigate those regions by examining their responses to various new tasks. A ‘localizer’ task was then developed, wherein the subjects either read sentences or sequences of pronounceable nonwords.

Now the investigators deducted the nonword-activated regions from the sentence-activated regions of the brain. It was observed, that a number of language regions were quickly and reliably identified in individual brains. This novel idea announced higher selectivity for sentences, compared to nonwords contrary to the ancestral group analysis adapted to the same data.

Fedorenko explained, “This new, more sensitive method allows us now to investigate questions of functional specificity between language and other cognitive functions, as well as between different aspects of language. We’re more likely to discover which patches of cortex are specialized for language and which also support other cognitive functions like music and working memory. Understanding the relationship between language and the rest of condition is one of key questions in cognitive neuroscience.”

Although the goal is to determine the precise nature of the computations of each brain region, Fedorenko insisted, that studies should be conducted to achieve a common standard for identifying language-sensitive areas. This will ensure the authors about the functions of each of these areas.

The study was published in the Journal of Neurophysiology, MIT.

Breast milk is more beneficial than risky for an infant