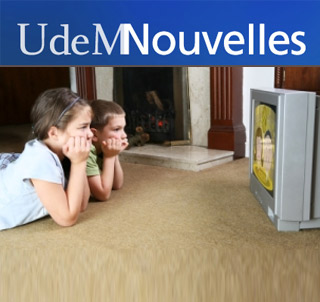 Toddlers seem to face the negative impacts of watching television. A recent study from child experts at the Université de Montréal, the Sainte-Justine, University Hospital Research Center and the University of Michigan revealed some startling facts. It seems to claim that television exposure at age two, may lead to negative consequences for kids, ranging from poor school adjustment to unhealthy habits. The study aimed, at understanding the impact of TV exposure at the age of 2, on future academic success, lifestyle choices and general well being among children.

The investigation was a part of the Quebec Longitudinal Study of Child Development Main Exposure. It was conducted with the help of 1,314 kids. The parents of these kids were asked to reveal the amount of time spent by their kids in watching TV, when at 29 months and at 53 months in age. On the other hand, the teachers were asked to evaluate academic, psychosocial and health habits. The body mass index (BMI) was then measured at 10 years old.

Dr. Linda S. Pagani, lead author, a psychosocial professor at the Université de Montréal and researcher at the Sainte-Justine University Hospital Research Center, stated, “We found every additional hour of TV exposure among toddlers corresponded to a future decrease in classroom engagement and success at math, increased victimization by classmates, have a more sedentary lifestyle, higher consumption of junk food and, ultimately, higher body mass index. Between the ages of two and four, even incremental exposure to television delayed development.”

Dr. Pagani warned, “Early childhood is a critical period for brain development and formation of behavior. High levels of TV consumption during this period can lead to future unhealthy habits. Despite clear recommendations from the American Academy of Pediatrics suggesting less than two hours of TV per day after the age of two parents seem to show poor factual knowledge and awareness of such existing guidelines.”

Dr. Pagani claimed that, although the study authors expected the impact of TV viewing to disappear after seven and a half years of childhood, the negative outcomes were appalling. The study calls for more awareness amongst parents, regarding TV exposure from the American Academy of Pediatrics.

Dr. Pagani insists that, since TV exposure encourages a sedentary lifestyle, television viewing must be curbed for toddlers, to avoid the maintenance of passive mental and physical habits in later childhood. It should be realized that TV exposure time, may be replaced by other developmentally enriching activities and tasks which foster cognitive, behavioral, and motor development. This study seems to enlighten an approach that is very important for many parental, pediatric and societal factors simultaneously.

The study was published in the Archives of Pediatrics & Adolescent Medicine.