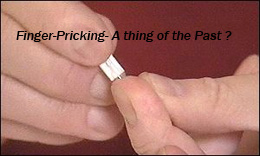 British scientists have developed a device to monitor diabetics’ blood sugar levels and administer insulin, raising the possibility of freeing patients from dependence on finger-prick blood tests and injections. The device, developed by scientists at Cambridge University, uses a computer to monitor the patient’s blood sugar levels, and administers insulin when levels rise too high.

The key is the computer program which works out the precise dose of insulin needed. By delivering the correct amount of insulin as soon as it is required, the technique could reduce long-term complications such as blindness, loss of sensation and ulceration of the feet, which can lead to amputation.

Achieving good blood-glucose control dramatically lowers the risk of serious complications by as much as 75 percent, according to the scientists.

The scientists, under the leadership of Roman Hovorka, will start clinical trials next January using monitors to measure blood glucose. Each patient’s monitor will be connected wirelessly to a computer that controls an insulin pump worn on a belt.

In the first stage of the trial, 12 patients aged between 5 and 18 will be fitted with a glucose monitor, according to the report.
In type 1 diabetes, the islet cells of the pancreas are killed by the immune system, and the pancreas cannot produce insulin, which is needed to control blood-sugar levels. The condition can be roughly corrected by regular insulin injections throughout the day.