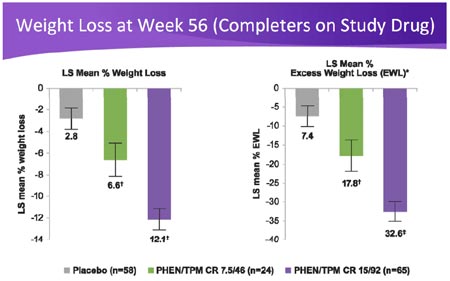 For those who haven’t heard of Qnexa, it’s is an investigational drug being developed to deal with weight loss, type 2 diabetes and obstructive sleep apnea. Scientists from St Luke’s Hospital now believe that obese diabetic patients exposed to Qnexa therapies apparently achieve about 33% excess weight loss.

The trial was a part of the CONQUER study which involved diabetic patients with a BMI greater than 35. Among these subjects, weight loss attained through Qnexa treatment was seemingly greater than the 7.4% observed in the placebo group after a 56-week procedure.

Nancy JV Bohannon, MD, FACP, FACE from the St Luke’s Hospital, cited, “multiple options are needed to address the parallel epidemics of diabetes and obesity, and that QNEXA could be a potential non-surgical approach to both treat obesity and improve glycemic control in obese diabetic patients.”

Also, other factors like fasting glucose, fasting insulin and hemoglobin levels also appeared to show improvements as a result of the weight loss. About 15% of patients who went through a full dose of Qnexa reportedly experienced normalization of glucose levels along with the withdrawal of all antidiabetic drugs. Such results were apparently seen in just 2% of the placebo patients. Some of the side effects witnessed within the study group were constipation, tingling effect and upper respiratory infection.