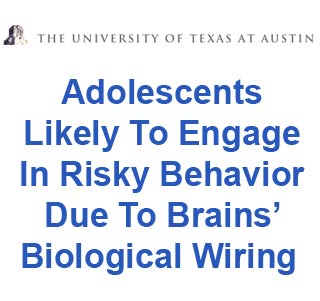 Teenagers are often stereotyped for taking poor decisions and risky behavior, but there seems to a reason behind that. A recent study from the University of Texas at Austin analyzed the brain systems which cause adolescents to have urges to display risky behavior and take poor decisions and the association of these biological differences may contribute to rash adolescent behavior. Though prior studies have apparently highlighted the sensitive side of teenagers, this study possibly presents the logic behind it.

The study encompassed individuals aged 8 to 30 who were put through a learning task. During the task all the participants classified an abstract image into one of two categories. They were provided with a feedback along with the correct response. Participants were kept motivated by distributing monetary gifts for each accurate response.

“Our results raise the hypothesis that these risky behaviors, such as experimenting with drugs or having unsafe sex, are actually driven by over activity in the mesolimbic dopamine system, a system which appears to be the final pathway to all addictions, in the adolescent brain,” affirmed Russell Poldrack a professor in the departments of Psychology and Neurobiology and directors of the university’s Imaging Research Center.

As individuals were grasping the means to categorize images, investigators concentrated on the way each participant’s brain responded to ‘reward prediction error’ or ascertained the distinctness emerging between an expected outcome of an action and the actual outcome. Supposedly earlier analysis has revealed the dopamine system in the brain to be directly responsive to prediction errors.

Poldrack added, “Learning seems to rely on prediction error because if the world is exactly as you expected it to be, there is nothing new to learn.”

Positive prediction error signals in the participants’ brains were calculated by the investigators. This was supposedly measured every time the participants found the results of their answers and the size of their rewards. Highest spikes in these prediction error signals displayed by adolescents, seemingly affirm the fact that teenagers have the largest dopamine response.

It is known that dopamine is crucial for motivation to seek rewards, making it clear that adolescent brains with greater prediction error signals may declare heightened motivation resulting in positive outcomes. It probably leads to greater chances of undertaking risks. However, further studies will be undertaken to determine the biological reasons for stereotypical adolescent behavior.

The study was published online in the journal Nature Neuroscience.