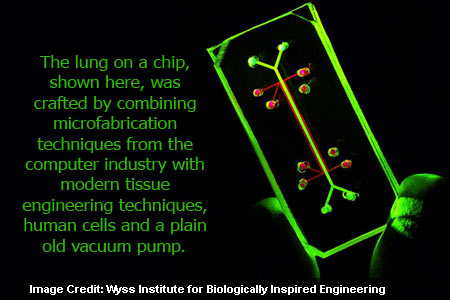 Scientists from Harvard’s Wyss Institute for Biologically Inspired Engineering have amalgamated microfabrication methods from the computer industry with modern tissue engineering techniques. This was done in order to combine human cells and a plain old vacuum pump to generate a living, breathing human lung-on-a-chip. The device is said to mirror the most active part of the lung namely the boundary line between the air sac and the blood stream.

The size of the device is as small as a rubber eraser; it acts like a lung in a human body and is formed using human lung and blood vessel cells. This translucent device provides a clear look into the inner workings of the human lung without necessarily entering a living body. It is essential for testing the effects of environmental toxins, absorption of aerosolized therapeutics. It is also significant for the safety and effectiveness of new drugs. This may enable accurate pharmaceutical development by lowering the dependence on current models in which testing a single substance can be expensive.

Donald Ingber, senior author on the research and founding director of Harvard’s Wyss Institute shares “The ability of the lung-on-a-chip device to predict absorption of airborne nanoparticles and mimic the inflammatory response triggered by microbial pathogens provides proof-of-principle for the concept that organs-on-chips could replace many animal studies in the future”.

Until now tissue-engineered microsystems have been restricted mechanically or biologically. Researchers share that it becomes difficult to understand how biology works if we do not put it in the physical context of real living cells, tissues and organs. When an individual breathes air enters the lungs, fills alveoli and transmits oxygen with the help of a thin, flexible, porous, permeable membrane of lung cells into the bloodstream. This membrane is responsible for the lung’s heavy lifting. It also notices inhaled bacteria or toxins and revives an immune response.

This new device has given a new approach to tissue engineering by placing two layers of living tissues around a porous, flexible boundary. Air is transferred to the lung lining cells that is present in the capillary channel to imitate blood and cyclic mechanical stretching mimicking breathing.

First author Dan Huh, a Wyss technology development fellow at the Institute reveals, “We were inspired by how breathing works in the human lung through the creation of a vacuum that is created when our chest expands, which sucks air into the lung and causes the air sac walls to stretch. Our use of a vacuum to mimic this in our microengineered system was based on design principles from nature.”

Researchers tested the devices response to inhaled living E. coli bacteria in order to understand how it copies the natural responses of living lungs to stimuli. They introduced the bacteria in the air channel on the lung side of the device and passed white blood cells through the channel on the blood vessel side. The lung cells identified the bacteria and revived the blood vessel cells through the porous membrane. These cells stimulated an immune response that finally forced the white blood cells to move to the air chamber and wipe out the bacteria.

Rustem Ismagilov, professor of chemistry at the University of Chicago, who specializes in biochemical microfluidic systems quotes, “The ability to recreate realistically both the mechanical and biological sides of the in vivo coin is an exciting innovation”.

Researchers introduced a range of nano-scaled particles into the air sac channel. They observed that some of these particles were present in commercial products and others were found in air and water pollution. Many of these nanoparticles moved into the lung cells that stimulated the cells to generate free radicals and provoked inflammation. Most of these particles moved through the model lung into the blood channel. This revealed that mechanical breathing immensely caused nanoparticle absorption. Researchers also verified these findings on mice.

Dan Huh elucidates, “Most importantly, we learned from this model that the act of breathing increases nanoparticle absorption and that it also plays an important role in inducing the toxicity of these nanoparticles”.

Researchers feel that it is too early to reveal how successful this analysis will be. There may be a new shift in drug discovery by using the potential of human cells to repeat the complex mechanical features and chemical microenvironments of an organ.

Robert Langer, MIT Institute professor shares “This lung-on-a-chip is neat and merges a number of technologies in an innovative way,” says. I think it should be useful in testing the safety of different substances on the lung and I can also imagine other related applications, such as in research into how the lung functions.”

Organ-on-a-chip reciprocates to stimuli in the same way how a lung in the living body responds. This may lower the dependence on animal testing specifically in pharmaceutical industry. This will reduce the cost and time it takes to pop in a new drug in the market. Researchers have not yet verified the system’s ability to copy gas exchange between the air sac and bloodstream. This however is an essential function of the lung due to which they are examining it now.