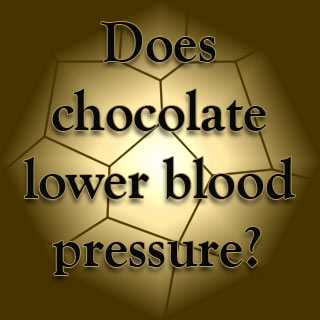 Chocolate is something that no one can resist be it a kid or adult. Eating about an ounce and a half of dark chocolate a day for two weeks seemingly has significant effects. Experts reveal hypertension a known risk factor for cardiovascular disease may be treated by dark chocolate and flavanol-rich cocoa products.

Previous analysis revealed that blood pressure may be lowered by consuming cocoa-rich foods. However several studies shared conflicting results. The new study sums up current evidence about the effect of flavanol-rich cocoa products on blood pressure among hypertensive and normotensive individuals.

Scientists accumulated information from Medline, Cochrane and international trial registries between 1955 and 2009 for randomized controlled trials. This was done to evaluate the effect of cocoa as food or drink as compared with placebo on systolic and diastolic blood pressure for a period of 2 weeks. Meta-regression analysis highlighted the link between type of treatment, dosage, duration or baseline blood pressure and blood pressure outcome. The statistical importance was marked at P less than 0.05.

The inclusion criteria was met by 15 trial arms of 13 evaluated analyses. Important blood pressure lowering effect of cocoa-chocolate compared with control was revealed by collective meta-analysis of all trials. Subgroup meta-analysis was important only for the hypertensive or prehypertensive subgroups whereas among normotensive subgroups, BP did not lower significantly.

Among the participants nine of them used chocolate containing 50% to 70% cocoa when compared with white chocolate or other cocoa-free controls. Six trials compared high with low flavanol cocoa products. Among active treatment groups daily flavanol doses ranged from 30-1000 mg and among interventions it ran from 2-18 weeks. Meta-regression analysis highlights design and type of control to be essential but indirect predictors for blood pressure.

Experts concluded by saying that dark chocolate is better than placebo to reduce systolic hypertension or diastolic prehypertension. They also share that flavanol-rich chocolate did not considerably lower mean blood pressure below 140 mmHg systolic or 80 mmHg diastolic.