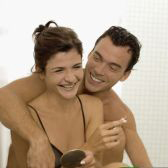 An experimental male contraceptive drug is being tested on rats by researchers of the international Population Council’s Center for Biomedical Research.

The drug, called Adjudin, which temporarily blocks the development of sperm does not interfere with testosterone levels in men and its effects wears off in 20 weeks.

So far, a male contraceptive pill has proved difficult to produce because of a basic biological fact of human reproduction: a man naturally produces about 150 million sperm each day of his adult life.

Existing chemical contraceptives for men under development are based on altering the levels of sex hormones circulating in the bloodstream in order to inhibit the natural state of male hyper-fertility.

Adjudin nips wannabe sperm cells in the bud. Those cells, called germ cells, ordinarily develop into sperm. But they need the help of other cells, called Sertoli cells, to reach that destiny.

Tests on vital organs, such as kidneys, liver, brain, heart, prostate gland and other cells of the testes showed that the drug had no effect, one researcher who pioneered the study, said. In men the drug would have to be taken as an implant rather than an oral pill as it is broken down in the digestive tract.

The rats quickly regained their ability to produce normal levels of sperm once the drug had been cleared from their bloodstream. In humans this would be a critical feature if the drug is to be acceptable to the public, he said.