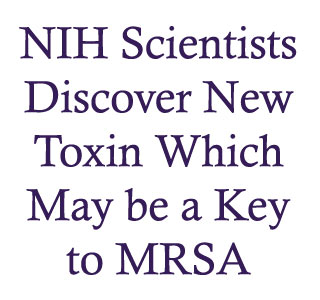 The methicillin-resistant Staphylococcus aureus (MRSA) bacterium seems to be affecting many individuals. An investigation to identify all the surface proteins of USA300 in this bacterium was undertaken. A team of investigators from the National Institute of Allergy and Infectious Diseases which is a part of the National Institutes of Health discovered and confined a unique toxin termed as LukGH that can be a dominant killer of human immune cells.

It is assumed that the toxin is a key factor in the severity of MRSA infections in usually healthy people. The toxin apparently contains two tiny proteins identified on the surface of the bacteria and is secreted without restriction into the surrounding environment. Having discovered 113 proteins linked with the surface of USA300, the experts began to determine the role of the formerly uncharacterized proteins.

The S. aureus surface proteins are affirmed to be the key indicators of the way pathogen will respond to contact with immune system cells. Just like the S. aureus surface proteins, that appears to be produced in large numbers by the body to kill invading microbes. Since some proteins are capable of aggressively attacking these immune cells, the death of neutrophils finally seems to allow the bacteria to replicate and flourish.

At the time of the research, the experts extracted the LukGH toxin from USA300. As a result, the strain seemingly caused small to no damage to human neutrophils. In the presence of the toxin, the bacteria formed pores in neutrophils which may ultimately led to their destruction. However, the entire role of LukGH to the severity of MRSA infection is not understood till date.

It has been revealed that LukGH is the only MRSA toxin known to enhance the destruction of human neutrophils. The destruction may take place after the bacteria have been ingested by the immune cells designed to hamper them. Further investigations to ascertain the role of LukGH in disease will be conducted by using animal models of MRSA infection. A prior investigation determined pomegranates to help treat MRSA.

The research is published in the journal PLoS One.