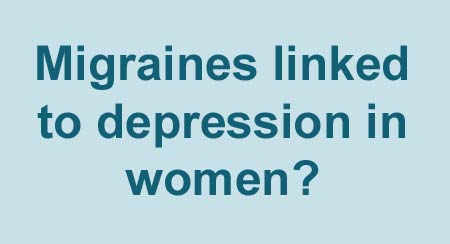 We just saw a study talking about the link between maternal migraines and baby colic. Now, scientists at the Brigham and Women’s Hospital in Boston have disclosed that women suffering from migraines or having a past experience of the same are likely to encounter depression, as compared to women devoid of migraines.

“This is one of the first large studies to examine the association between migraine and the development of depression over time. We hope our findings will encourage doctors to speak to their migraine patients about the risk of depression and potential ways to prevent depression,” commented Tobias Kurth, MD, ScD, with Brigham and Women’s Hospital in Boston and Inserm in France and a Fellow of the American Academy of Neurology.

As per the results, nearly 6,456 women seemed to suffer from present or past migraine. After a median 14 years follow-up trial, almost 3,971 of the women in the study developed depression. The investigators found that women having a history of migraine were apparently 40% likelier to develop depression, relative to their counterparts without migraine.

The outcomes were similar for women suffering from migraines with aura, which is characterized by temporary loss of vision and disturbances appearing as zigzag lines or flashing lights.

The study will be presented at the American Academy of Neurology’s 64th Annual Meeting in New Orleans.