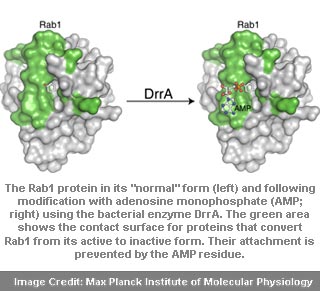 When the lungs are infected with the Legionnaire’s bacterium Legionella pneumophila, a patient supposedly suffers from acute pneumonia. It is known that after the pathogen intentionally penetrates into cells of the human immune system, it injects a multitude of proteins that meddle within the normal cellular processes. A recent research initiated by experts from the Max Planck Institute of Molecular Physiology in Dortmund apparently sheds light on the way Legionella reprogrammes the cells to be alive and propagate.

Protein employed by the pathogen to alter material transport in the cells for its own needs was thoroughly scrutinized by the researchers. It is known that in a Legionella infection, the bacteria is surrounded with immune cells and bound by a membrane in the cell interior. On releasing proteins reprogramming the human cell, Legionella ensures its survival and fulfills its needs.

One of these proteins, called as DrrA was previously affirmed to divert the material transport in human cells in the direction of the pathogen. It does this by the usage of Rab proteins that are assumed to change molecules which co-ordinate transport vesicles within cells. The ultimate aim of these proteins may be to assure that the vesicles reach their exact destination at the correct time.

Aymelt Itzen from the Max Planck Institute of Molecular Physiology shared, “The permanent activation of Rab1 by DrrA could ensure increased material transport in the direction of the Legionella containing compartment and hence support its survival.”

From a wide variety of 60 Rab proteins, DrrA particularly employs the Rab1 molecule for its purposes. After accumulating Rab1 on the membrane engulfing the bacteria, the protein seems to be activated. So part of the material transport of the human cell may be altered to the vesicle accommodating the bacterium. Having conducted the structural and biochemical analysis of DrrA, the experts conclude that DrrA is unable to activate Rab1 and can enhance its stimulated state.

Roger Goody from the Dortmund Institute commented, “These results represent an example of how the molecular analysis of bacterial diseases can help us not only to understand the cellular mechanisms involved in an infection, but also the functioning of healthy cells.”

Currently, the switching-off of Rab1 and recognition site for regulatory proteins by attaching an AMP molecule to Rab1 has not been determined. In Legionnaire’s disease, the bacterial protein DrrA seemingly exposes the way a human regulatory protein (Rab1) is stimulated in a targeted way and maintained in an active state. Hence, whether Legionella conceived this kind of regulation or healthy cells are able to control material transport in a similar but previously unknown manner remains a mystery.