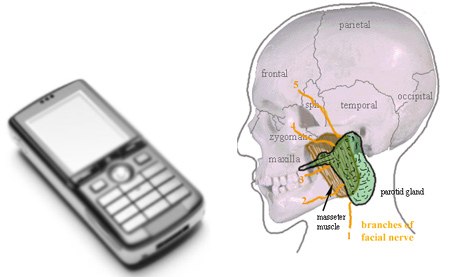 Innumerable studies have been done to understand whether mobile phones are indeed harmful to our health. One said that excessive usage was linked to poor sperm quality; while another showed that radiation from handsets could cause headaches; and yet another one tried to prove that mobile phones could increase the risk of mouth cancer and tumors. Now, an Israeli study has suggested that heavy mobile phone usage could increase the risk of cancer of the salivary gland and the mouth.

In fact, only yesterday, we reported a study which suggested that even cordless phones are harmful to one’s health.

The author of the research Dr. Siegal Sadetzki, a cancer specialist at Tel Aviv University studied around 500 Israelis who had developed a slavery tumor gland. He then compared it with 1,300 healthy adults.

It was found that those who used a mobile phone for several hours a day were 50% more likely to have developed a salivary gland tumor.

“Compared to other studies, the amount of exposure to radiofrequency radiation we saw here was much higher. If you like, you’re seeing what could happen elsewhere ‘speeded-up’ in Israel,” said Dr. Siegal Sadetzki.

The parotid gland is the largest human salivary gland that is located near the jaw and ear, and this happens to be exactly where mobile phones are held.

The study also suggested that mobile users who live in rural areas could be at an increased risk of cancer because cell phones need to emit more radiation to locate fewer antennas.

The author has said that the risk of mobile use can be minimized by using the speaker phone, hands-free devices and limiting the number of calls made and hours spent talking on phones.