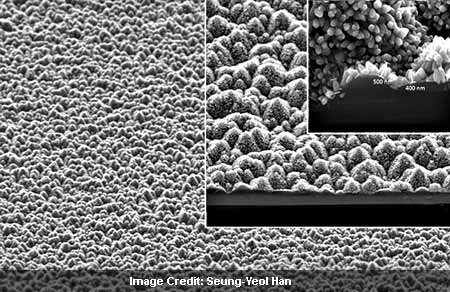 Chemical engineers at Oregon State University have recently developed an advanced technology in order to deposit ‘nanostructure films’ on various surfaces. This lately introduced technology is expected to be of foremost use as coatings for eyeglasses, costing lesser with enhanced functioning. Eventually the method may establish an enhanced way for making solar cells more efficiently to generate energy.

Significantly, the films eliminate light reflectivity. But, when eyeglasses capture more radiance, they diminish glare along with the exposure to ultraviolet light. Some coatings equipped with these features are already existent but this most recently invented technology necessitates enhanced performance at a lower cost. Besides, it should also be able to be applied on-site in a dispenser’s office.

“There’s really a whole range of things this technology may ultimately be useful for. They should be able to make almost any type of solar energy system work more efficiently, and ultimately could be used in cameras or other types of lenses,” stated Chih-hung Chang, an associate professor in the OSU Department of Chemical, Biological and Environmental Engineering.

According to Chang, a patent has been applied for on the new method, and the first commercial products may be made available within a year.

The solution to the process is using a chemical bath, governed by a microreactor, to place thin-film deposits on numerous substrates such as glass, plastic, silicon or aluminum. Specifically in such case, the technology will engender a particular type of nanostructure which exhibits similarity to millions of tiny pyramids in a small space, working to ebb any light’s reflectivity that strikes the material.

The researchers are now working on the application of this thin film to polycarbonate. The latter is a type of plastic most generally utilized in eyeglass production. Experts are considering developing a small unit which can apply the films inexpensively in an office setting.

It is expected that the final product should be faster to apply and affordable. It should eliminate waste of materials and function better than current technologies.