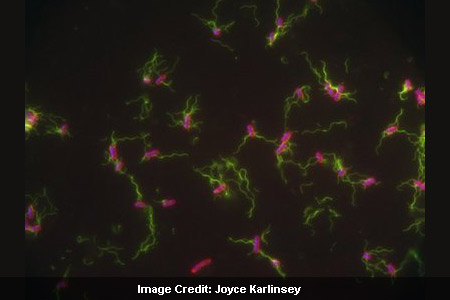 On consumption of contaminated food, Salmonella may enter a person’s gut. It is assumed that this bacterium can spread to other parts of the body too. Salmonella may especially affect newborns, adolescents, the elderly, and cancer or HIV patients. Scientists reveal a new mechanism in Salmonella which can apparently affect its virulence and susceptibility to antibiotics by changing its production of proteins. This seems to enable the bacterium to alter its level of specific proteins.

The mechanism is believed to be present in all five kingdoms of life that are animals, plants, fungi, protista and monera. At the time of the research, mutant Salmonella resistant to a form of nitric oxide that normally stops the bacteria from dividing were screened. The scientists then identified mutations in two rarely studied genes. These are assumed to be closely associated to poxA and yjeK genes.

Many bacteria reveal these two genes to be correlated to a third gene. That gene can possibly encode the Bacterial Elongation Factor P that is included in protein production. It has been suggested that these three genes function in a similar pathway which seems to be vital for Salmonella bacteria’s capacity to result in a disease and resist various classes of antibiotics.

Dr. Ferric C. Fang, professor of microbiology, laboratory medicine, and medicine at the University of Washington (UW), also director of the Clinical Microbiology Laboratory at Harborview Medical Center in Seattle said, “Sometimes it seems as if the most basic discoveries in biology have already been made. It was fun and unexpected to learn something new about a process as fundamental as protein synthesis.”

It was ascertained that Salmonella along with mutations in the poxA gene or the yjeK genes is almost similar and displays alike alterations in proteins involved in metabolism. Single mutant strains are possibly symbolized by strains with mutations in both genes. The duo seem to function in the same pathway. When examined under stressful conditions, many abnormalities were reported by the mutant strains.

It was highlighted that several compounds significantly restricted the growth of these mutant strains. Therefore, the deformity may be dwelling in a common stress response. It was ascertained that the mutant bacteria was measurably different from the wild-type Salmonella under 300 distinct conditions. Moreover, abnormal production of virulence factors can probably decline their capacity to survive in the host.

The scientists expose the way poxA and yjeK change the bacterial protein elongation factor required in the production of proteins. These proteins possibly enable the bacteria to employ alternative energy sources when they lack nutrients. This alteration may take place after they enter host cells. The Salmonella with mutations in poxA and yjeK appeared to respire inappropriately under nutrient-poor conditions wherein wild-type Salmonella are unable to respire.

Fang elucidated, “This is an interesting illustration of molecular evolution. This essential, but previously unrecognized mechanism, for regulating the production of proteins appears to have been conserved over evolutionary time and continues to take place in cells belonging to all five kingdoms of life.”

It seems that mutant strains are unable to decide when to give up. There is possibility that wild-type Salmonella enters a state of suspended animation to weather harsh conditions. On the other hand, the mutants are incapable of responding efficiently because of environmental stress. The mutants appear to respire when they are in dire straits. So the production of toxic oxygen-containing compounds may be triggered by these mutants. A similarity was supposedly noted in the method poxA gene alters the bacterial elongation factor to regulate stress resistance, and the way resemblance acting factor is controlled in plant and animal cells.

In the process when protein is developed, transfer RNA generally termed as tRNA possibly places an amino acid at the end of a growing chain of protein building blocks. A particular type of enzyme is assumed to commonly help the tRNA place the amino acid. The findings highlight the poxA enzyme to directly attach an amino acid to the Elongation Factor P protein instead of the tRNA.

The research is published in the July 29 edition of Molecular Cell.