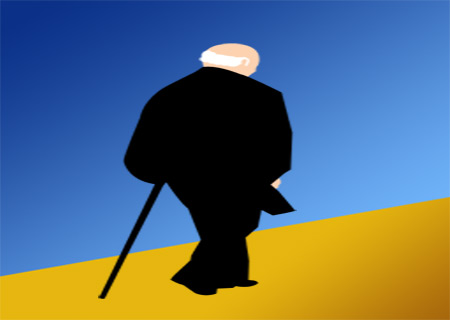 A new study by scientists at the American Academy of Neurology (AAN) reveals that the pace of walking may signify the onset of mild cognitive impairment (MCI) in old age. Reported in the journal Neurology, the study supports previous studies talking about the effect of slow walking on dementia.

As part of the trial, nearly 93 persons aged 70 and above were inspected. Among these volunteers, about 54 of them did not encounter memory issues, around 31 experienced MCI without memory troubles and roughly 8 of them suffered from MCI related to memory problems.

“If we can detect dementia at its earliest phases, then we can work to maintain people’s independence, provide treatments and ultimately develop ways to prevent the disease from developing. Our in-home monitoring approach has a lot of potential to be used for sustaining independence of the elderly.” remarked study author Hiroko Dodge, PhD, with Oregon Health and Science University in Portland and a member of the American Academy of Neurology.

The subjects were exposed to memory tests and their walking speeds were gauged for a span of 3 years. They were divided into 3 groups based on their walking speeds such as slow, average and fast. The results showed that people with non-memory related MCI were apparently 9 times likelier to be slow walkers, as compared to those who walked at moderate or fast paces. The alterations in walking speeds also seemed to be associated with MCI.

In the trial, the investigators placed infrared sensors on the upper panels of houses for gauging the movement of participants in the main area. This technique of monitoring speeds seemingly gave the team a fair idea of how slight differences in walking speeds could be tied to MCI.

However, further studies are required to understand if walking speed could indeed predict the onset of memory troubles during old age.

Fear of moving outdoor may be traced to walking difficulty in...