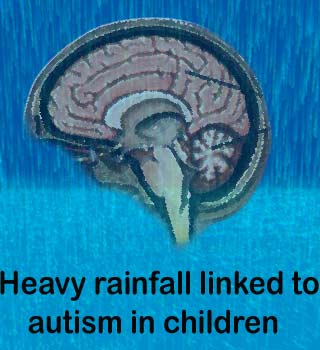 Here’s a novel research that will surely leave you at wits end. Researchers from Cornell University have found a significant association between heavy rainfall and autism. Children born in places which have wet weather are apparently highly prone to the disorder.

According to lead researcher Dr Michael Waldman, “The rates of autism were positively related to the amount of precipitation these counties received from 1987 through 2001Similarly, focusing on (counties within) Oregon and California, autism prevalence was higher for (those children who) experienced relatively heavy precipitation when they were younger than 3 years. There is also the possibility that precipitation itself is more directly involved.”

As part of the study, scientists examined children born between 1987 and 1999 in different parts of three American states namely California, Oregon and Washington. The analysis showed that rainfall may be a potential environmental trigger that can make children who already have high chances of developing the disorder to ultimately develop the autism symptoms. The problems may be mild or complex. The study showed an additional 34 cases of autism per 1,000 children in areas with heavy rainfall.

Though experts are unable to ascertain a reason for the link they mention that heavy rainfall could be a carrier of a series of chemicals from the atmosphere to ground level. It could also be because children in rainy lands spend most of their time indoors which brings them up close to many domestic chemicals too. Estimates claim nearly one in 100 people could suffer from the condition.

The latest issue of the Archives of Paediatrics & Adolescent Medicine journal has published this study.