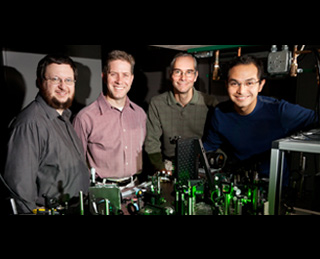 Physicians tackling the life-threatening disease cancer may benefit from this piece of information. Scientists from the University of Illinois have developed a tissue-imaging technique that supposedly points out cancer cells faster. This microscopy technique called as nonlinear interferometric vibrational imaging (NIVI) can possibly help determine whether a cell is normal or abnormal.

Results of NIVI experiments conducted on rat breast-cancer cells and tissues appeared in less than five minutes. The outcome reported was easy-to-read, color-coded images of tissue, outlining clear tumor boundaries, with more than 99 percent confidence. Present day diagnostic methods are subjective and probably based on visual interpretations of cell shape and structure. The newly introduced technique presumably examines and constructs images based on molecular composition.

Though normal cells contain high concentrations of lipids, cancerous cells may produce more protein. NIVI apparently makes it possibly to distinguish cells with abnormally high protein concentrations accurately. Experts note that every type of molecule has a novel vibrational state of energy in its bonds. On improving the resonance of that vibration, it can probably generate a signal for pointing out cells with high concentrations of that molecule. The technique supposedly employs two beams of light for exciting molecules in a tissue sample. One beam of light allegedly acts as a reference, so that combining that beam with the signal produced by the excited sample eliminates background noise and isolates the molecular signal.

Stephen A. Boppart, who is involved in electrical and computer engineering, bioengineering and medicine, and lead researcher, remarked, “The analogy is like pushing someone on a swing. If you push at the right time point, the person on the swing will go higher and higher. If you don’t push at the right point in the swing, the person stops. If we use the right optical frequencies to excite these vibrational states, we can enhance the resonance and the signal.”

Statistical analysis of the resulting spectrum may develop a color-coded image at each point in the tissue. While the normal cells will appear blue, cancer cells are red. NIVI technique also provides a seemingly precise mapping of tumor boundaries. The red-blue color coding supposedly indicates an uncertain boundary zone of about 100 microns, which is merely a cell or two. Additional investigations are carried out to enhance and broaden the application of the NIVI technique by tuning the frequency of the laser beams.

The research will be published in the December 1 issue of the journal Cancer Research.