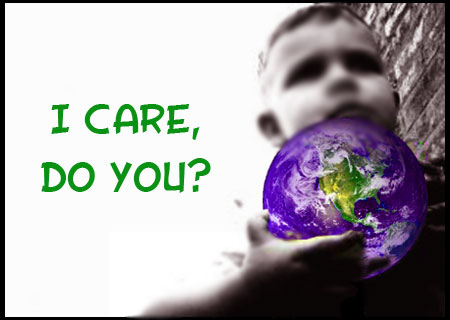 Environment, since long, has been a debatable topic and a hot issue on the desks of environment scientists. Just like a government policy, the results of the debates are declared in media and newspapers; people listen to it, read it and then get back to their work, completely forgetting about it.

Everyone knows that the environment is degrading. Everyone also knows that there are various health risks linked to environmental degradation. But everything has been left in the hands of environment scientists and social activists. Rests are just passive listeners. So will this feature also go into the dustbin in the memory room of the brains of readers?

Well, shall we believe the contrary? No one has turned heartless yet, right? We can’t let the slow poisoning of the environment take place. Slow poisoning of people’s lives. Everyday some one somewhere coughs to death, dies of lung cancer, is infected with respiratory disorders.

Now, what is the connection between all this? Well, in simple words – If we don’t care for our environment, we will end up putting our and other’s lives in danger. Or should it be said this way – if we want good health, we should keep the environment healthy. Okay, let us not start with a boring lecture. So instead, let us all actively take part in the noble cause of saving our health by saving the environment, this World Environment Day. That is right, June 5, the World Environment Day, is the day we can prove that we care for health, if not for environment.

And how can that be done?

Well a first simple step would be – restrict the emission of carbon! Carbon ban is also UN’s theme this year on World Environment Day. The United Nations Environment Programme (UNEP) has “Kick The Habit: Towards A Low-Carbon Economy” as its motto and has vowed to make this world carbon-neutral.

Now, Carbon dioxide has been discussed like a celebrity; basking in limelight but refusing to recede from the environment.

What is this hype around Carbon all about?

Although, Carbon is naturally present everywhere, Carbon in the form of carbon dioxide poses serious health risks. Increased levels of carbon dioxide lead to acidosis (ie acidity). Acidity causes restlessness and hypertension, which is the mildest negative effect of the disorder; and this when the level of carbon dioxide is just from 300-400 ppm which is the present scenario. And the aforementioned disorders are being witnessed by people regularly in their day-to-day lives. Way back in 2005, Mongabay.com had reported the rise of carbon dioxide level in the air by ‘27 percent higher than at any point in the last 650,000 years’ in the Antarctic ice. So carbon dioxide has already started showing its presence in a very dangerous way.

Now imagine the level reaching the 600ppm mark which is not far away, looking at the rate at which carbon is increasing in the air. With such a level, one is bound to have a difficulty in breathing, rapid pulse rate, headache, hearing loss, hyperventilation, sweating and fatigue. And this can virtually happen in a stuffed room. If the level of carbon dioxide reach the 600 ppm mark in the earth’s atmosphere then the condition will permanently be like that of a stuffed room.

In offices, workers are already complaining about disorders caused due to exposure to carbon dioxide. The carbon dioxide levels in offices can go upto 800-1200 ppm and 2000ppm in conference rooms leading to carbon dioxide poisoning. Well, if one finds solutions in air-conditioners, then she/he must not be aware of the CFCs, one of the green house gases that ACs emit.

And from where does all this carbon come from?

It comes out from industrial and economic activities like burning of fossil fuels, cement production, etc and many other day-to-day human activities like more usage of automobiles, etc. Use of automobile has largely been blamed on, yet people aren’t getting back to walking small distances or cycling or atleast using public transport. Cutting on maximum usage of cars leads to saving of fuel and energy and less release of carbon dioxide and other harmful gases like sulphur, nitrogen, ethane, methane, thus saving one from daily headaches.

Okay, now a lot of preachy business has been done of usage of automobiles in the past as well. Let us talk about something that won’t take much time to do and will save the earth and our health from the carbon torture. Let us all start using the compact fluorescent bulbs instead of the incandescent light bulbs (i.e. the normal ones). Are you asking “what is the connection between bulbs and carbon?”. Well then, the answer is – the fluorescent light bulbs just need about one fourth of the electricity taken up by a normal bulb to light up one’s homes. According to Dr. Anish Andheria, who contributed his article to Sify.com for the site’s Earth Hour initiative, if US alone has to stop the use of a normal bulb, it would save about “$18 billion annually and the annual energy demand for lighting would drop by the equivalent of the generation from 30 nuclear power plants or 60 coal burning power plants”, as per an estimate.

The incandescent bulbs are also responsible for heating up the air as 90% of the electricity it consumes is turned only 10% into light and all the fossil fuel and non-renewable sources burnt to produce electricity gets wasted. Moreover the green house gases emitted during the production of electricity lead to environment degradation and health hazards like asthma, respiratory disorders, lung cancer, cardiovascular illnesses, emphysema, etc. Moreover, it is a well-know fact that the global warming phenomenon is burning a hole in ozone layer. This has enabled the UV rays from the Sun to penetrate the atmosphere.

Well, the environment and health issues are not restricted to the carbon levels in air (i.e. air pollution) only. People’s health faces threats from water and soil pollution as well. Governments in various countries have been making policies for industries, consumers business that would lead to well-being of health and environment. Industries letting chemical waste into water-bodies must revisit their policies relating to their duties towards the ecosystem.

The chemical pollutants in water bodies interfere with ecology and cause threats to marine life. Pollutants exist as free radicals like organomercury in water bodies and cause lipid peroxidation of membranes in the marine animals like fish. Also fish, which is a staple diet for most of the population on this earth, gets contaminated with mercury and it directly poses danger to human, mammal and birds who consume fish.

The microbial pollutants in water cause dysentery, diarrhea, cholera, typhoid, fever and many such water-borne diseases as the water bodies are not managed properly. Lakes and water resources are not fit for providing drinking water any more. Infact this problem is more prevalent in urban areas, where the water pipes and sewage pipes are close to each other and in case of any leakage, which happens most of the time, the whole drinking water gets contaminated, threatening the health of entire city.

One more key element polluting water is the agro-chemicals, which get washed away during rains and enter water bodies. Infact, agrochemicals cause both water and land pollution. Agrochemicals like pesticides cause severe illness especially amongst rural population working in and around fields. The agro chemicals are more hazardous in time of droughts leading to salinity of soil. From health point of view, there have been studies which have confirmed that agrochemicals have adverse effects on reproductive health, cause cancer especially in children, immune-system disruption, endocrine disruption, impaired nervous-system; in case of long-term exposure.

While most of the solutions may be in the hands of the government, the initiative towards showing concern and influencing policies still lies in the hands of common man. After all, we all love to have a good health right? We wear clothes to protect ourselves, so why not equip ourselves with a better environment for a better health, as well?