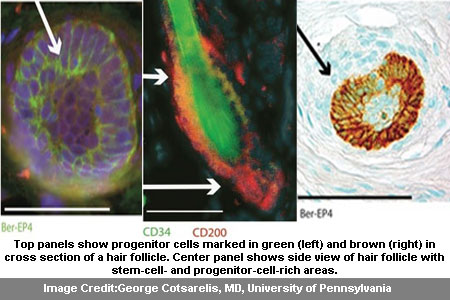 The precise cause of male balding at the cellular level has been unfolded in this piece of tidbit. Scientists from the University of Pennsylvania School of Medicine claim that stem cells are the hallmark in understanding what happens in a bald scalp. The research findings can seemingly help introduce cell-based treatments for male pattern by isolating stem cells and expanding them to add back in the scalp directly.

Researchers used cell samples of men undergoing hair transplants to compare follicles from bald scalp and non-bald scalp. The bald areas reportedly had the same number of stem cells as normal scalp in the same person. Yet the other more mature cell type termed as a progenitor cell was supposedly depleted in the follicles of bald scalp. It was concluded that balding may occur due to a complication with stem-cell activation and not the numbers of stem cells in follicles.

In male pattern balding, hair follicles do not disappear, but presumably shrink. Reactivating stem cells is apparently possible because in the bald scalp their number remains unaffected. George Cotsarelis, MD, chair of the Department of Dermatology at the University of Pennsylvania School of Medicine, and colleagues discovered a progenitor cell population in mice that is analogous to the human cells. These cells can seemingly aid in making hair follicles and growing hair when injected into an immunodeficient mice. Additional investigations will be commenced for assaying the stem and progenitor populations in other types of hair loss, including female pattern hair loss.