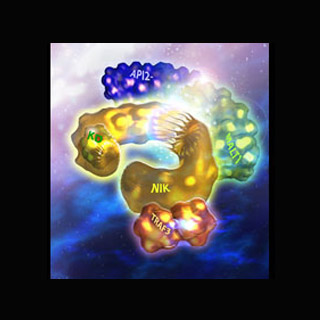 The American Cancer Society estimates that this year will be witnessing 65,540 new cases of non-Hodgkin lymphoma. Since tackling cancer seems to be the need of the hour, experts from the University of Michigan Comprehensive Cancer Center have found that when two proteins API2 and MALT1 are fused together in a subset of lymphomas, they can trigger a cancer growth. While the API2 part of the fusion connects with an enzyme called NIK, MALT1 splits NIK into two parts, a process known as cleavage.

The API2-MALT1 fusion protein seems to be 30-40 percent of the time in a type of B-cell lymphoma named mucosa-associated lymphoid tissue, or MALT, lymphoma. It was mentioned that MALT does not occur in any other cells. The cleavage of NIK by this fusion oncoprotein probably unlocks novel means to activate NIK. The protein fusion appears as a promising treatment target. Researchers believe that the ripple effect on NIK can be produced only by the fusion of API2 and MALT1, without the fusion NIK cleavage does not take place.

MALT lymphomas carrying the API2-MALT1 fusion protein are predicted to be more aggressive and more resistant to treatment. So the result is larger tumors that are supposedly spread throughout the body. When NIK becomes stable, it supposedly leads to a series of downstream reactions that make cells more likely to metastasize and more resistant to current treatments. Linda McAllister-Lucas, M.D., Ph.D., and colleagues reversed these effects by simply turning off NIK. It can therefore be concluded that preventing NIK from becoming stable by blocking the protein fusion can allegedly halt the growth and spread of MALT lymphoma tumors.

The research was published in the January 28 issue of Science.