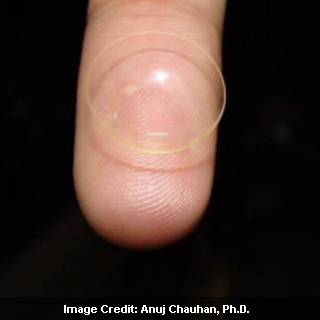 We had just reported about a possible test which may save eyesight by detecting glaucoma years earlier. Now, a new study claims that a popular dietary supplement vitamin E, packed into unique medicated contact lenses, could help keep glaucoma medicine close to the eye, where it could treat the condition.

The study authors utilized use of vitamin E to come up contact lenses that may convey more medication for glaucoma and possibly other diseases to the eye. The experts mentioned that glaucoma seems to be second only to cataracts as the principal cause of vision loss and blindness in the world. It apparently affects around 67 million people. Eye drops that ease the irregular upsurge of pressure within the eye that arises in glaucoma, appears to be a mainstay treatment.

“The problem is within about two to five minutes of putting drops in the eye, tears carry the drug away and it doesn’t reach the targeted tissue. Much of the medicine gets absorbed into the bloodstream, which carries it throughout the body where it could cause side effects. Only about one to five percent of drugs in eye drops actually reach the cornea of the eye,” commented, Anuj Chauhan, Ph.D., who led the study team.

Chauhan and colleagues have crafted a new extended-release delivery system integrating vitamin E into contact lenses. The invisible clusters or aggregates of vitamin E molecules appear to form what Chauhan defines as ‘transport barriers’ that seem to decelerate the avoidance of the glaucoma medication from the lens into the eye. The drug discharged from the lens into the eye seems to remain in the tears for more than 2-5 minutes with eye drops, thus resulting in a more effectual therapy.

Chauhan mentioned, “These vitamin structures are like ‘nano-bricks. The drug molecules can’t go through the vitamin E. They must go around it. Because the nanobricks are so much bigger than the drug molecules – we believe about a few hundred times bigger – the molecules get diverted and must travel a longer path. This increases the duration of the drug release from the lenses.”

In the study with laboratory animals, the lenses comprising of vitamin E nanobricks seem to administer drugs up to 100 times longer as compared to most of the commercial lenses. The lenses may be intended for incessant wear for up to a month. The contacts could aid other eye conditions like cataracts and dry eye.

Chauhan remarked, “Vitamin E is a proven nutraceutical that in small amounts is good for the eye because of its ant-oxidant properties. Also Vitamin E presence in the contact lenses blocks UV radiation, leading to increased protection against the UV light. Our research has shown that the vitamin can be loaded into the lenses without any reduction in transparency. We believe it could be helpful in disease treatment and in prevention as well.”

Chauhan mentioned that clinical trials of the new lenses may start within a year to 2 years.

The study was presented at the 239th National Meeting of the American Chemical Society (ACS).