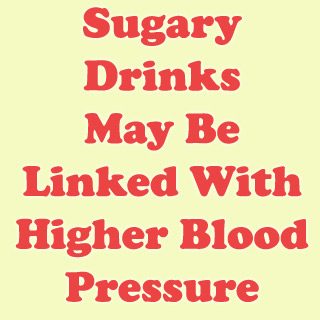 It now seems that soda and other sugar-sweetened beverages like fruit drinks are linked with higher blood pressure levels. A recent study suggests that drinking soda and other sugary drinks elevate blood levels among adults. The study findings probably have greater significance in the medical terrain.

During the International Study of Macro/Micronutrients and Blood Pressure (INTERMAP), experts examined consumption of sugar-sweetened drinks, sugars and diet beverages in 2,696 participants. While the volunteers were from an age group of 40 to 59 years, they belonged to eight areas of the United States and two areas of the United Kingdom. In depth interviews administered by trained observers, two 24-hour urine collections, eight blood pressure readings were undertaken to gather details about what subjects ate and drank for four days. Volunteers were also subjected to a detailed questionnaire on lifestyle, medical and social factors.

“People who drink a lot of sugar-sweetened beverages appear to have less healthy diets,” said Ian Brown, Ph.D., research associate at Imperial College London. “They are consuming empty calories without the nutritional benefits of real food. They consume less potassium, magnesium and calcium. One possible mechanism for sugar-sweetened beverages and fructose increasing blood pressure levels is a resultant increase in the level of uric acid in the blood that may in turn lower the nitric oxide required to keep the blood vessels dilated. Sugar consumption also has been linked to enhanced sympathetic nervous system activity and sodium retention.”

For every extra sugar-sweetened beverage consumed per day, participants on average may have significantly higher systolic blood pressure by 1.6 millimeters of mercury (mm Hg) and diastolic blood pressure higher by 0.8 mm Hg. This possibly remained statistically strong even after adjusting for differences in BMI. Higher blood pressure levels were registered in individuals who consumed more glucose and fructose, both sweeteners found in high-fructose corn syrup. Also people with high levels of both sugar and sodium allegedly had higher blood pressure. No consistent association between diet soda intake and blood pressure levels appeared. It was concluded that a reduction in the intake of sugar-sweetened beverages as well as added sugars and sodium can help to decline blood pressure and boost cardiovascular health.

The study is published in Hypertension: Journal of the American Heart Association.