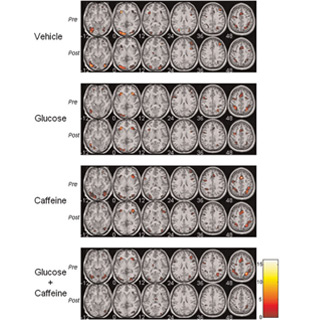 A combination of caffeine and glucose is beneficial in the health terrain, so at least the following tidbit suggests so. A groundbreaking study claims that combined caffeine and glucose causes synergistic effect and boosts the capability of brain activity. The neural substrate for combined effects of these two substances was noted with the help of functional MRI imaging.

A double-blind randomized study was undertaken on a sample of 40 healthy volunteers at the Diagnostic Imaging Centre of the Hospital Clínic de Barcelona. Participants were made to drink a study beverage consisting of either caffeine, glucose or the two combined or a placebo which was only water. It appeared that those consuming caffeine and glucose in combination have declined brain activation. This reduction is apparently linked with the task in the bilateral parietal cortex and the left prefrontal cortex. Both these regions of the brain may be actively involved in attention and working memory processes.

Josep M. Serra Grabulosa, from the Department of Psychiatry and Clinical Psychobiology at the UB and a member of the August Pi i Sunyer Biomedical Research Institute (IDIBAPS), added, “Our main finding is that the combination of the two substances improves cognitive performance in terms of sustained attention and working memory by increasing the efficiency of the areas of the brain responsible for these two functions.”

Throughout the task, decreased activity and no drop in behavioral performance was probably witnessed. So it can be predicted that the brain is more efficient under the combined effect of the two substances. It probably requires fewer resources for generating same level of performance than that needed by subjects drinking the placebo or who took only caffeine or glucose. Functional MRI was utilized for scrutinizing brain activity during the n-back task. This imaging technology possibly examines sustained attention and working memory that are basic capacities in boosting each day cognitive tasks.

The study was published in the journal Human Psychopharmacology: Clinical and Experimental.