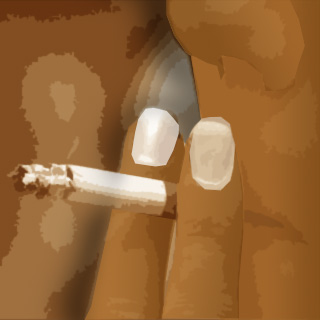 There have been numerous reports on smoking and many still keep coming, stating how smoking affects a person physically as well as mentally. According to researchers from the Kimmel Cancer Center at Jefferson, smoking is yet again to be blamed for the development of advanced cancer. Exposure to nicotine through cigarette smoking may perhaps increase the chances of pancreatic ductal adenocarcinoma becoming metastatic.

Pancreatic cancer is known to be the fourth-leading cause of cancer death in the country, taking 34,000 lives a year. It was observed that only four percent of individuals with pancreatic cancer survive for approximately five years after diagnosis. An associate professor of Surgery at Jefferson Medical College of Thomas Jefferson University and a member of the Jefferson Pancreatic, Biliary & Related Cancers Center, Hwyda Arafat, M.D. Ph.D., claimed that an isoform of a protein called osteopontin is the cause for increased metastasis potential.

Apparently, nicotine promotes the expression of osteopontin. Also, increased levels of osteopontin seem to have been found in pancreatic ductal carcinoma (PDA). Dr. Arafat along with her research team examined PDA samples and established that the isoform, called OPNc, was also expressed on invasive PDA lesions. Earlier studies were believed to have revealed that OPNc is expressed in several invasive cancers thereby assisting metastatic behavior.

“This is the first time a relationship between nicotine and OPNc expression has been identified. These data are very exciting because now we can evaluate OPNc as a prognostic and diagnostic marker of invasive PDA lesions. Because of the lower expression levels of OPNc in non-smokers, OPNc may be regulated by nicotine, which is another novel finding of this study. The exact role of OPNc in PDA remains to be defined, but it could provide a unique potential target to control pancreatic cancer aggressiveness, especially in people who smoke cigarettes,” says Dr. Arafat.

The researchers seem to have linked OPNc expression with the patients’ smoking history. However, the findings revealed that OPNc expression was found on 87 percent of the invasive PDA lesions that were analyzed, out of which smokers comprised mainly 73 percent. In addition, the OPNc expression appears to have been associated with increased expression levels of osteopontin. Allegedly, OPNc was absent in premalignant lesions.

The findings of the study will be published in the journal Surgery.