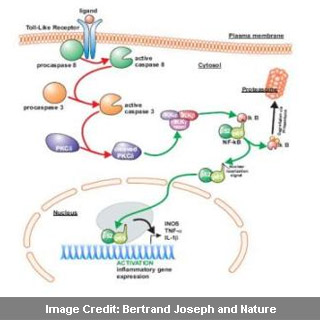 The neuro – degenerative diseases such as Alzheimer’s and Parkinson’s may be partly deducible to brain inflammation. Now experts from the Karolinska Institutet have discovered that a family of enzymes can restrict this inflammation and hence act as a promising target for drugs. The research findings apparently have major implications in the medical world.

It was mentioned that microglial cells supposedly play an important role in neurodegenerative diseases. These cells are probably the nerve system’s primary immune cells. An over-activation of these cells within the brain can purportedly trigger inflammation, resulting in neuronal death. Scientists have allegedly found a novel means to avoid the activation of the microglia and consequently the inflammation they cause. The key is the blocking of enzymes known as caspases which presumably regulate microglial activation.

The caspases, a group of enzymes causing cell death is believed to serve as signal molecules controlling the activity of other cells. Analyzing cell cultures and mice has enabled researchers to examine that the caspases 3, 7 and 8 activate, instead of destroying microglial cells, which trigger an inflammatory reaction. Mice given caspase inhibitors may have fewer activated microglia, less inflammation and cell death in the surrounding neurons. Associate Professor Bertrand Joseph, who led the research and colleagues also assessed samples from deceased Alzheimer’s and Parkinson’s patients.

As a result, higher incidence of activated caspases in microglial cells appeared. Further investigations are being conducted to analyze whether substances inhibiting the caspases can help treat certain neurological diseases.