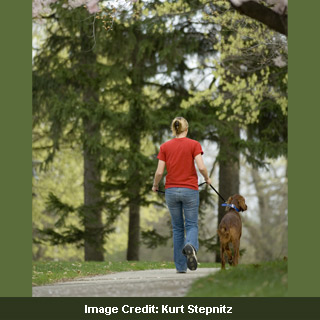 Young dog owners are believed to be physically active, and here is another investigation which further highlights the benefits of the same. A Michigan State University investigator and epidemiologist Mathew Reeves suggests that people who own a dog and take their dog for a walk are 34 percent more likely to meet federal benchmarks on physical activity. Promoting dog ownership and dog walking can supposedly help many people to achieve the recommended levels of leisure-time physical activity.

As a part of the study, data from the Michigan Behavioral Risk Factor Survey was thoroughly scrutinized. It was observed that owning and walking a dog apparently has a strong impact on the amount of walking a person does and also the level of remaining active overall. People who walked their dogs on a daily basis seemingly walked about an hour longer per week than those who owned dogs but did not walk them. Authors evaluated the amount of leisure-time physical activity a person gets, like walking, dancing and gardening. Public health benchmarks may call for at least 150 minutes of such activity a week.

“Obviously you would expect dog walkers to walk more, but we found people who walked their dog also had higher overall levels of both moderate and vigorous physical activities,” said epidemiologist Mathew Reeves. “There appears to be a strong link between owning and walking a dog and achieving higher levels of physical activity, even after accounting for the actual dog walking.”

The social and human/animal bond aspects of owning a dog is assumed to have a positive impact on quality of life. Dog ownership purportedly elevates participation in walking and overall physical activity. Middle-age people allegedly have the least amount of time to walk their dogs and younger as well as older people get the most physical activity benefit. Dogs 1 year old or younger reportedly were more likely to be walked than older dogs. The larger the breed, longer the duration of walks may be.

The study appears in the current issue of the Journal of Physical Activity and Health.