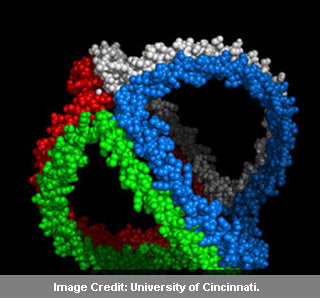 HDL (high-density lipoproteins) commonly referred to as the ‘good’ cholesterol apparently plays a crucial role in tackling cardiovascular diseases, such as heart attack and stroke. Investigators from the University of Cincinnati (UC) claim that understanding the structure of HDL cholesterol can help explain the way it safeguards against heart diseases. HDL is packets of protein and fat that allegedly delivers fat to certain locations within the body.

In the current research, investigators isolated human HDL and scrutinized its 3-D structure as it circulates in human plasma. A series of sophisticated spectroscopic and mass spectrometric techniques were put to use for inspecting HDL. It then appeared that proteins of HDL form a cage-like structure that encapsulates its fatty cargo. Most of the HDL particles circulating in human plasma may be significantly identical in structure. But the particles probably have a twisting or shock absorber-like motion that allows them to adapt to changes in particle fat content.

“Unfortunately, we’ve known very little about the molecular details that explain HDL’s protective effects,” shared W. Sean Davidson, PhD, professor in UC’s pathology and laboratory medicine department, lead investigator. “A major reason for this is an almost complete lack of understanding of HDL’s structure and how it interacts with other important plasma factors.”

Ascertaining the structure of HDL can empower physicians to highlight the physiological interactions occurring with HDL, including its twisting movements. This monopolization of the particle surface is believed to help HDL interact with the protein itself. Hence, apolipoprotein A-I may be greatly involved HDL function and its protective effects. The research findings reportedly have important implications for understanding key interactions in plasma that modulate its protective functions in cardiovascular diseases.

The research was published online ahead of print edition on March 13, 2011, in the journal Nature Structural and Molecular Biology.