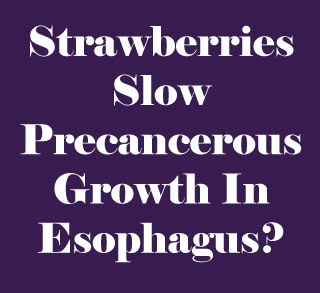 Scientists conducted a Phase Ib trial on participants with esophageal precancerous lesions who were at high risk for esophageal cancer. The study subjects had to eat 60 grams of freeze-dried strawberries daily for a period of six months. Also a dietary diary chronicling their strawberry consumption was filled in. It was mentioned that freeze-dried strawberries may be vital as excluding the water from the berries helps concentrate the preventive substances by nearly 10-fold.

“We concluded from this study that six months of eating strawberries is safe and easy to consume. In addition, our preliminary data suggests that strawberries can decrease histological grade of precancerous lesions and reduce cancer-related molecular events,” said lead author Tong Chen, M.D., Ph.D., assistant professor, division of medical oncology, department of internal medicine at The Ohio State University.

Biopsy specimens were examined before and after strawberry consumption. As a result, 29 out of 36 participants reportedly experienced a decline in histological grade of the precancerous lesions. It was affirmed that strawberries can slow the progression of precancerous lesion in the esophagus. This fruit can be allegedly employed as an alternative or along with other chemopreventive drugs for the prevention of esophageal cancer.