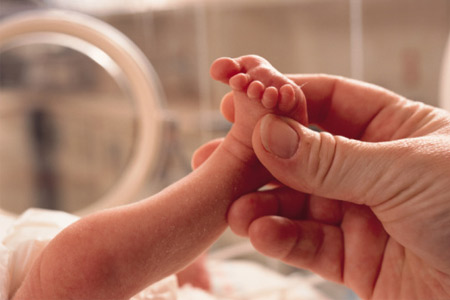 Bronchopulmonary dysplasia (BPD) is a chronic lung disorder that may develop in premature infants. Those who overcome this condition supposedly have greater threat of developing recurrent respiratory infections, such as pneumonia or bronchiolitis. Experts from the University of Kentucky now suggest that the antibiotic azithromycin can assist in treating Ureaplasma-colonized or infected premature infants to restrict BPD.

The study was conducted on a group of 220 infants admitted to the UK Neonatal Intensive Care Unit from September 2004 to August 2008. The enrollment criteria included a birth weight of less than 1,250 grams, the use of intermittent mechanical ventilation for less than 12 hours, and an age of fewer than 72 hours. It was pointed out that 73 percent subjects in the azithromycin-treated group and 94 percent in the placebo group colonized or infected with the Ureaplasma bacteria probably developed BPD or died. The presence of the Ureaplasma bacterium appears as a risk factor in developing BPD. This bacterium allegedly leads to inflammation within the lungs.

“Current preventative therapies for bronchopulmonary dysplasia are limited. Because the inflammation from an Ureaplasma infection often leads to BPD, and because this bacterium is so easily spread to infants from the mother, we sought to find out if the anti-inflammatory benefits of azithromycin could help prevent the disorder from developing,” said Dr. Hubert O. Ballard, the UK neonatologist leading the study.

During the study, each infant was randomized to receive azithromycin or a placebo for a six-week period. Those testing positive for Ureaplasma were placed in a separate subgroup of the study. In conclusion, it was asserted that azithromycin can benefit preterm infants colonized or infected with Ureaplasma.

The study is published in Pediatric Pulmonology.