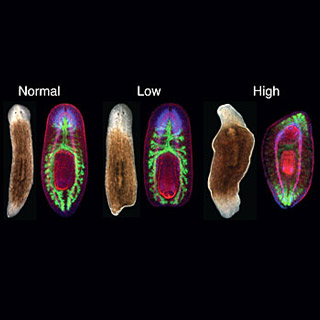 Planarians are flatworms. If one cuts off their head or tail, a new one comes to substitute it. In the flatworm’s body, nerves, muscles, connective tissues, and complete organs redevelop when injured or detached.

A research claims that Hedgehog signaling in planarians apparently adjusts regeneration polarity in them.Loss of this signaling pathway could avert tail regeneration, while there is a boost in signaling consequences in the regeneration of tails at both anterior and posterior end.

Daily, the human body restores a likely 10 billion cells lost to injury or regular cellular housekeeping. More noticeably, salamanders, flatworms, and hydra, among other organisms, produce completely new body parts when these are lost to damage or amputation.

Alejandro Sanchez Alvarado, a Howard Hughes Medical Institute investigator at the University of Utah, has assisted in establishing the planarian, Schmidtea mediterranea, as a potent model system, which is being used to discover how the flatworms attain their astonishing regenerative feats. He is examining fundamental cellular signaling pathways i.e. molecular circuits that flatworms, fruit flies, fish, and people all contain them. Sanchez Alvarado mentioned that apparently there are at least seven main pathways of this kind, all of which are in someway caught up in deciding how embryos grow during development. Since regeneration, like embryonic development, needs that an organism construct new body parts and place them properly in an existing organism, Sanchez Alvarado reasoned that these signaling pathways could be a fine place to commence looking for the molecular tools used in regeneration.

Last year, he and his team found that one of these molecular circuits, called the WNT pathway, is a chief player in planarian regeneration. Now, he’s worked out a significant regenerative function for a different vital circuit, the Hedgehog signaling pathway.

Sánchez Alvarado, commented, “We found that this pathway is very important in modulating the cell-cell communication that takes place during regeneration.”

Preceding research by many other scientists had illustrated that the Hedgehog pathway is imperative for standard development of animals ranging from fruit flies to humans. In particular, elements of the pathway apparently guarantee that all the chief body parts end up in the correct place. When Hedgehog signaling goes off-center, nonetheless, correct development could be dislocated, thereby resulting in severe and frequently fatal birth defects.

Next, Sanchez and his colleagues, postdoctoral scientists Jochen C. Rink and Kyle A. Gurley and graduate student Sarah A. Elliot, influenced several parts of the Hedgehog pathway to estimate their effect on regeneration. Via RNAi technology, the Hedgehog pathway was crushed, they then removed different parts of the planarians. The outcome was astonishing as worms with damaged Hedgehog signaling could regrow their heads as usual. But without Hedgehog, planarians were not capable of redeveloping their tails.

The researchers then increased the amount of Hedgehog signaling in the planarians. When they removed the head at that time, a second tail grew in the place of head. Sanchez and his team saw that too much Hedgehog results in two-tailed flatworms without heads. The researchers concluded that Hedgehog signaling is fundamental for adjusting regeneration along the head-to-tail axis. This regenerative function fits with the task of Hedgehog in embryonic development, where it motivates the early body pattern and, tells an embryo to develop its feet at the bottom and its head at the top. Additionally, Sanchez discovered that Hedgehog signaling supposedly completes its function by acting on the WNT pathway.

The results draw the expert faster to his final objective i.e. understanding the exact sequence of molecular events that happen during regeneration. Once this molecular flowchart is worked out, Sanchez Alvarado envisages in attempting to generate regeneration in animals like mammals.

Humans seem to have all of the genetic and molecular tools required for regeneration that have been recognized so far, and the researcher is of the opinion that someday, medicine might offer a method to jump-start a profound, hidden regeneration capability.

The findings were published in Science Express.