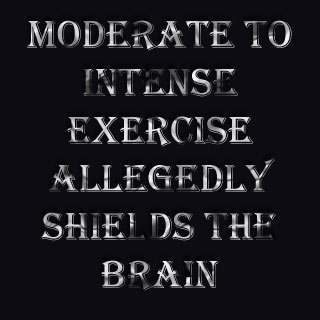 Small brain lesions, sometimes referred to as ‘silent strokes’ may be the first sign of cerebrovascular disease. In a major breakthrough, experts found that older people who exercise regularly at a moderate to intense level have lower chances of developing the small brain lesions. These ‘silent strokes’ also appear connected with a higher risk of falls and impaired mobility, memory problems, dementia as well as stroke.

In this study, 1,238 people who never witnessed a stroke were thoroughly monitored. The participants had to fill in a questionnaire on how often and how intensely they exercised at the beginning of the study. Then they underwent MRI scans of their brains an average of six years later, when their average age was 70 years. Approximately 43 percent of the participants allegedly performed no regular exercise, while 36 percent were involved in regular light exercise, such as golf, walking, bowling or dancing. The other 21 percent participated in regular moderate to intense exercise including hiking, tennis, swimming, biking, jogging or racquetball.

“These ‘silent strokes’ are more significant than the name implies, because they have been associated with an increased risk of falls and impaired mobility, memory problems and even dementia, as well as stroke. Encouraging older people to take part in moderate to intense exercise may be an important strategy for keeping their brains healthy,” commented study author Joshua Z. Willey, MD, MS, of Columbia University in New York and a member of the American Academy of Neurology.

After analyzing the brain scans, it was reported that 197 of the participants or 16 percent had small brain lesions or infarcts called silent strokes. Those performing moderate to intense exercise, on the other hand, appeared 40 percent less likely to have the silent strokes than people who did no regular exercise. The results apparently remained unaffected even after adjusting for vascular risk factors like high blood pressure, high cholesterol and smoking. No difference between those who were engaged in light exercise and subject who did not exercise was registered.

The study is published in the June 8, 2011, online issue of Neurology, the medical journal of the American Academy of Neurology (AAN).