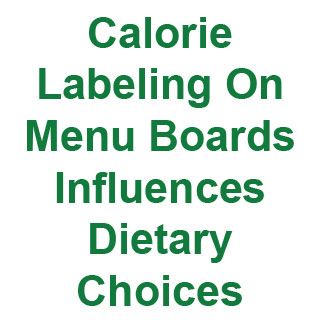 Of the various ways to tackle obesity, this one seems like a good alternative to keep a tab on those building calories. According to a study conducted by a team in New York city, many of the inhabitants purchase lunch at restaurants based on the calorie counts posted in the menu for making low calorie choices.

Investigators examined a set of New Yorkers prior to and after March 2008 when fast food chains had just begun posting calories in the menu card. After one year of the trend beginning to catch hold in New York, 1 out of every 6 participants of the survey said that they scanned through the posted calorie counts to make the right calorie choices. They seemingly bought food with 106 lesser calories than those who did not view the calorie chart. The NYC rule for calorie posting was established across all nations through the health care reform bill in 2010. It will be put to effect nationally by next fall.

“New Yorkers who want to limit their calories are using posted calorie information to do so. By requiring fast food chains to post the amount of calories in food items, we’ve made it easier for New Yorkers to make more informed choices about the food they eat. This customer survey shows that people who are taking calorie counts into account when they order are purchasing fewer calories as a result. Posted calorie listings help consumers make healthier choices. Considering the extremely high rates of obesity, these types of systematic changes to the food environment are needed to make a difference in combating today’s obesity epidemic,” remarked Dr. Thomas Farley, New York City Health Commissioner.

The calorie count initiative has been invoked to reduce the obesity rates of New York city. A nutritious diet constitutes more fruits, vegetables, is low in fat and satisfies everyday calorie suggestions. It will apparently go a long way in shielding against chronic diseases like cardiovascular problems and so on.

As part of the study, the analysts surveyed above 15,000 lunchtime consumers and revised their register receipts from 168 locations of 11 well-known fast food joints in NYC in 2007 and 2009. The study took place before and after the rule was put to effect. Around 15% of the customers reportedly read the posted calorie counts to make their food choices and seemingly purchased 106 fewer calories. Three major food chains were also observed and it came to light that they prominently decreased the calorie content of foodstuffs bought in 2009 than the ones purchased in 2007. Consumers at Au Bon Pain purchased 80 fewer calories, KFC customers purchased 59 fewer calories and McDonald’s users bought 44 lesser calories as per the receipt after the law was implemented. There were 42% customers from these restaurants cumulatively.

One such joint, subway presented a substantial rise in calories sold post implementation. Nevertheless, the latter undertook a $5 foot-long sub sandwich promotion during the survey. This resulted in tripling of the number of consumers purchasing the 12-inch sandwich. In 2007, before the law was regulated, 1 in 4 users bought a 12 inch sub, while in 2009, 3 in 5 persons picked up a 12-inch sandwich. The information did not present overall alteration in calories at all food joints. Though the stating of calorie counts alone cannot work towards controlling obesity, it will play an important role in informing people and helping them keep a track of their diet.