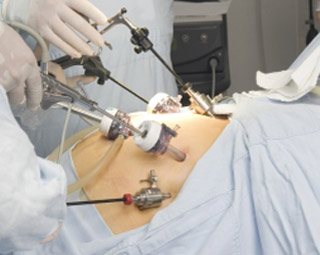 We recently reported that bariatric surgery is cost effective for all obese persons. Now, as per a study from scientists at Imperial college London, gastric bypass surgery changes diet choices of persons in a way that they consume less high fat foodstuffs. The results put forward a new system by which specific kinds of bariatric surgery can help in long-term weight loss.

More and more people seem to be opting for bariatric surgeries to lose weight. The most efficient procedure is ‘Roux-en-Y’ gastric bypass where the stomach is stapled to form a tiny bag-like elevation at the top, which is then hooked up to the small intestine. It bypasses nearly the entire stomach and duodenum. This apparently causes the patients to control their consumption by feeling full sooner.

The study constituted 16 participants in which obese people were made to undergo gastric bypass surgery or any other operation like vertical-banded gastroplasty on a random basis. 6 years later they were told to fill in questionnaires where it came to light they seemingly included low amounts of fat in their diet.

Dr Carel le Roux, from the Imperial Weight Centre at Imperial College London, who led the research, cited, “It appears that after bypass surgery, patients become hungry for good food and avoid junk food not because they have to, but because they just don’t like it any more. If we can find out why this happens, we might be able to help people to eat more healthily without much effort.”

The aforesaid trials suggest that the mice preferred lower fat food supposedly due to the effects of digesting the food. The rats did not presumably show differences when the bottle was within their access for just a few seconds. This reveals that the rats did not appear to dislike the taste of high fat food when they could have smaller amounts at a time.

Rats are known to avoid foods that they relate to diseases. Therefore the scientists tested if high fat foods would cause them to let go of particular tastes. The rats were then administered saccharine-flavoured water and also had corn oil infused into their stomachs. The gastric bypass rats seemed to avoid saccharine, whereas the sham-operated rats did not. This implicated that the digestion of corn oil appeared to result in an unpleasantness for gastric bypass surgery group mice.

The proportions of the satiety-promoting hormones GLP-1 and PYY were greater after the gastric bypass rats were fed compared to the other group. This suggests a potential mechanism for alterations in food preferences. The team has now planned to examine these genes to see if there were chances to replicate the results of gastric bypass without operation.

The findings are published in the American Journal of Physiology—Regulatory, Integrative, and Comparative Physiology.