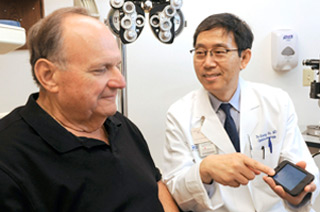 With devices keeping a track on diabetes now in common use, this one may serve the purpose of an eye test. An ophthalmo – logist at UT Southwestern Medical Center has apparently created a safe and easy-to-use device that helps patients with degenerative eye disease to keep a check and gauge vision alterations.

The device, namely myVisionTrack, performs an accurate self-examination in less than 90 seconds. It presents 3 circles on a screen, out of which one is substantially different from the others. Patients are touted to blindfold one eye, and then touch what they observe as an unusual circle out of the 3. As the person hits on the circle, the differentiation becomes more and more obscure. The trial is supposed to be conducted for the other eye too. Also, users do not have to keep their scores in mind each time, as they are readily preserved in the device. If any considerable change is identified, users have to visit their doctor.

“Many patients do not have timely eye exams and end up suffering preventable vision loss. Careful self-monitoring is critical because treatment for age-related macular degeneration and diabetic retinopathy is most effective when given at precise stages in the disease’s progression,” explained Dr. Yu-Guang He, associate professor of ophthalmology at UT Southwestern.

Patients suffering from degenerative eye disease initially made use of an eye chart invented in 1940s to keep a tab on their visual disturbances. It was known as an Amsler Grid, which looks similar to a graph paper and comprises a black dot at the center. As the patients tend to focus on the point, they seem to observe unclear, curled and missing lines on the grid.

Apparently, most users employing the aforesaid method were not able to recognize minute vision changes. Contrarily, myVisionTrack’s shape discrimination tests are doubly sensitive than the paper eye chart in locating small vision problems. Scientists conducted an 8-month clinical study to measure the efficacy of the device. It constituted 40 diabetic patients who were tested positive for retinopathy and made use of the monitor at home on a weekly basis. The results presumably showed a high inter-relation with an ophthalmologist’s calculations of their retinal pictures taken at the start, mid or during conclusion of the study.

myVisionTrack device was manufactured by Vital Art and Science and is available as an app for iPhone and iPod touch.