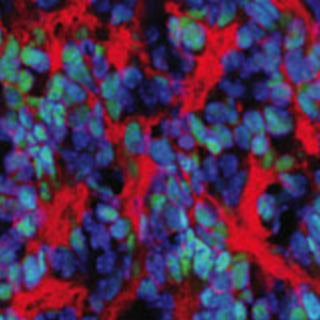 Retinoblastoma is a morbid tumor in the eye that is related to mutations of a protein called Rb or retinoplasma protein. Now, a research conducted by Carnegie scientists has unfolded a particular sequence of RNA that plays a paramount role in retino-blastoma.

MicroRNAs are tiny, single threads of genetic substances that hook up to longer strands of messenger RNA. The latter is the courier that transfers the genetic encryption of the DNA in the nucleus to the cell’s ribosome, where it is apparently converted into protein. This unifying action enables microRNAs to cease the expression of select genes in an objective manner. Unnatural versions of microRNAs have been implied in different forms of cancers too.

The analysts targeted a clan of microRNAs called miR-17~92. Initial studies have shown that this set may contribute to the survival of pre-cancerous cells and support their growth. It had been shown earlier that it is involved in the growth of lymphoma and leukemia cells by lowering levels of a tumor-suppressing protein namely PTEN. This research puts forth a similar action of miR-17~92 in retinoblastoma but not through PTEN. Contrarily, it seeks to aid cells that are devoid of the tumor-suppressing protein Rb to develop.

The team first showed the presence of substantial proportions of miR-17~92 in all human retinoblastomas and specific mice models. Programmed mice that were capable of expressing greater amounts of miR-17~92 in their retinas were used in the research. When coupled with the inactivation of Rb partners, expression of this cluster caused massive retinoblastoma. Furthermore, they presented that this enormity of miR-17~92 seems to suppress a growth inhibitor known as p21Cip1, which supposedly makes up for Rb deprivation.

According to one of the lead authors David MacPherson, these outcomes which affirm that miR-17~92 combats the cell’s efforts to compensate for the absence of Rb could be implicated in other kinds of cancers too. This microRNA subset may pave way for new therapeutic targets in the treatment of tumors due to deficient Rb.

The research is published in the August 15th issue of Genes & Development.