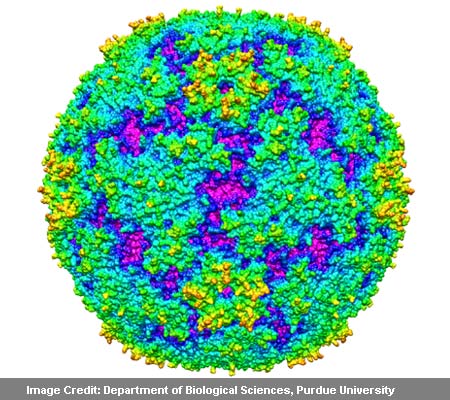 Not many of us are aware of a virus called enterovirus 71 that causes childhood illnesses like hand, foot and mouth disease. A new research by scientists at Purdue University has unfolded the complete structure of enterovirus 71, which could lead to development of effective therapeutic options for the same.

The team used a method called X-ray crystallography to gauge the virus’s detailed structure and pitted it against related viruses such as poliovirus. According to the observations, a key molecule called pocket factor of the virus was found. This molecule seemed to surface out of its encapsulation when the virus inflicted a human cell. Thereafter, the strain released its genetic material into the cell and advanced in the body.

“Taken together, the findings in both papers are useful when you are trying to stop the virus from infecting host cells. The common theme is that they both report for the first time on the structure of this virus, and this tells us how to design compounds to fight the infection,” commented Michael G. Rossmann, Purdue’s Hanley Distinguished Professor of Biological Sciences.

Most medications used for the treatment of diseases caused by such viruses apparently accumulated in the pocket factor, thereby inhibiting the virus from infecting a cell. However, in case of enterovirus 71, a part of the pocket factor bulged out of the pocket which exposed a hydrophilic tip of the same. Therefore, the scientists hypothesized that antiviral medications need to possess a hydrophilic tip at one end to impede enterovirus 71 infection.

The enterovirus 71 is also reported of causing encephalitis in children, which presently has no optimum form of treatment. Another paper by Oxford University professionals on this front is scheduled to be printed in the journal, Nature Structural & Molecular Biology on March 4.

This research is published in the journal, Science.