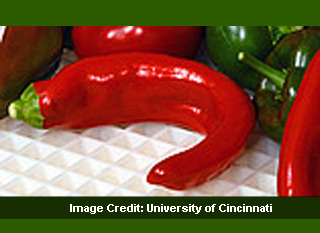 Though chili may add flavor to food as a spice, it may seem repulsive to the senses for a lot of people owing to its strong spicy effect. According to University of Cincinnati scientists, a nasal spray comprising of an ingredient obtained from hot chili peppers known as capsicum annum presumably helps lessen specific kinds of sinus inflammations.

As part of the study, Capsicum annum nasal spray was pitted against a placebo nasal spray in 44 participants diagnosed with a considerable component of nonallergic rhinitis for a span of 2 weeks. Capsicum annum consists of capsaicin, which is apparently the main constituent of chili peppers and appears to cause a hot sensation. It is also an active substance used in many topical therapies for short-term pain relief. Since it has gained approval by the FDA, it is also available commercially.

“Basically, we concluded that the spray was safe and effective on non-allergic rhinitis,” commented Cincinnati allergy researcher Jonathan Bernstein, MD.

The outcome showed that individuals who utilized the nasal spray with Capsicum were shown to have experienced early relief just a minute after applying the spray unlike the control group. Non-allergic rhinitis is known to be an upper respiratory problem that is supposedly caused by many factors such as weather conditions, use of perfumes and so on. However, at times, patients may not be aware of the reason behind their inflammation. According to Bernstein, there are not many good medications for this condition at present.

The study has been published in the August 2011 edition of Annals of Allergy, Asthma & Immunology.

Depressed people with memory problems may be at greater risk of...