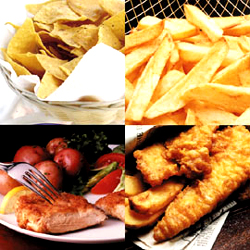 According to a new research study, cholesterol-raising trans fats may be vanishing from supermarket shelves, restaurants and food joints, however ironically the one type of fat replacing their place is certainly no healthier option.

Artificial trans fats are formed when food manufacturers add hydrogen to vegetable oil to make it solidify, in a process called hydrogenation. Partially hydrogenated oil increases the stability of a food’s flavor, along with its shelf life, and the oils have long been an essential ingredient in baked and fried foods.

Research has proved that trans fats in these oils may be even more hazardous for the heart health than the saturated fat found in foods like meat and butter. Apart from increasing ‘bad’ LDL cholesterol, as saturated fat does, they also reduce heart-healthy HDL cholesterol.

That explains why New York City recently banned them from restaurants, and other cities may do the same – the search for alternatives is on.

However, one of those replacement fats – so-called interesterified fats – may be bundled with their own health threats, states a study published in the journal Nutrition & Metabolism.

The interesterified oils may not only lower HDL levels but also cause a considerable rise in blood sugar, researchers found.

The findings are concerning, study co-author Dr. K. C. Hayes told Reuters Health, in part because the study volunteers used the interesterified fats for only four weeks. “Blood glucose went up quite precipitously,” said Hayes, a professor of biology at Brandeis University in Waltham, Massachusetts.

The problem, he and his colleagues found, seems to be that interesterified fats change the body’s levels of insulin, which regulates blood sugar.

The researchers arrived at their findings after having 30 healthy volunteers follow each of three diets for four weeks apiece. In each diet, participants got about 30 percent of their calories from fat, with the major source being either a natural saturated fat (palm oil), or partially hydrogenated soybean oil, or interesterified soybean oil.

In comparison to palm oil, the interesterified fat shot up the volunteers’ blood sugar by 20 percent, while also lowering their HDL.

Interesterified fats are already being used as a replacement for trans fats in commercial foods. “It’s probably the number-one process to replace trans fats,” Hayes maintained.

The current findings, he added, suggest that further research is essential before the fats become the new standard.

Hayes said consumers can find out whether their newly “trans-fat-free” crackers and cookies have interesterified fats by looking for “fully hydrogenated oil” on the package’s ingredient list.

If the ingredients simply list the type of oil – canola or corn, for example – then the fat is present “as nature intended it,” Hayes noted.