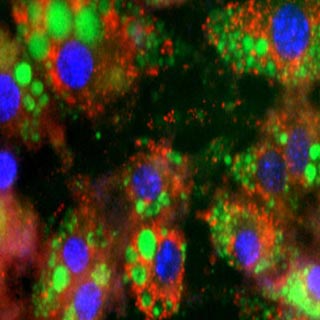 Researchers at Dana-Farber Cancer Institute have discovered a method to produce a natural energy-burning type of fat which may possibly fight against obesity and diabetes. They were believed to have engineered mouse and human cells by utilizing two proteins. These two proteins seemed to have work in series as a ‘switch’ to change the cells into brown fat producing cells.

Apparently, surplus caloric energy in the diet gets accumulated in white fat cells which pile up in the body, predominantly in the thighs and abdomen. However, in overweight people, the stored fat content puts stress on these cells. Supposedly, these cells give out signals which cause inflammation in body organs and the circulatory system thereby creating risks of cardiovascular disease and diabetes.

In comparison to the white fat cells, brown fat or Brown Adipose Tissue appear to have functioned in an absolute reverse manner. Brown fat cells are known to have a huge supply of mitochondria. Thus mitochondria which are tiny organelles carry out the function by utilizing oxygen by burning sugar from the diet in order to produce heat, instead of storing the energy as fat. In addition, brown fat seems to protect animals from cold situations and also assists in preventing obesity.

Lead researcher Bruce Spiegelman, PhD, of the, Dana-Farber Cancer Institute, was believed to have found both the elements of a molecular switch. Evidently, this molecular switch usually causes the transformation of immature muscle cells inside the embryo into obesity-busting brown fat, with the help of two proteins. The two proteins, namely, PRDM16 and C/EBP-beta seem to have carried out the function collectively in order to stimulate the production of brown fat in various types of cells.

In order to find out if these two proteins could change the identity of various types of cells, which would thereby lead the cells to become brown fat cells, the researchers further carried out the analysis. They were noted to have made use of viruses to shift the proteins into embryonic mouse connective tissue cells also known as fibroblasts, adult mouse skin cells and human skin cells.

Spiegelman was of the opinion that the findings ‘give a lot more credence’ to efforts in using the brown fat switch as a possible method for treating people with obesity and diabetes. He imagines that in future, patients may be able to administer a brown fat drug.

The findings of the research have been published in the journal Nature.