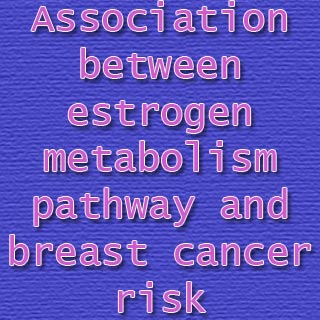 Estrogen levels in men seem to impact prostate cancer as we earlier mentioned. Experts for the Genome Institute of Singapore (GIS) and the Karolinska Institutet, Sweden of late identified that DNA polymorphisms linked to the formation of estrogen play a significant role in the development of hormone-sensitive breast and endometrial cancer. Findings may help initiate better approaches for blocking and treatment of breast cancer.

The study enlisted 7577 participants from Sweden and Finland. Findings overcome many limitations of previous analyses which identified a limited number of single nucleotide polymorphisms in some candidate genes through single SNP analysis.

“Previous studies have typically looked at single genes and have produced inconsistent results. Genes work together in complex networks. By using a systematic approach to interrogate the network of genes that affects hormonal exposure and hence risk of breast and endometrial cancers, we found a small group of genes which works together to affect cancer risk. The results of this study has moved us one step closer to understanding the common pathways which are involved in the development of breast cancer and endometrial cancer,” shares first author, Dr Low Yen Ling who was involved in this study while she was at the GIS, is currently a Clinical Scientist at the Abbott Asia-Pacific Nutrition Research & Development Center.

This study increases the possibility of having a test using multiple genetic markers when added together. These tests may highlight the risk for the most common forms of breast cancer. As compared to single markers combined markers and knowledge of estrogen metabolism pathways made the difference.

Director of the NUS-GIS Centre for Molecular Epidemiology, Prof Chia Kee Seng elucidates, “This study is the result of a very strong collaboration between the Genome Institute of Singapore and the Karolinska Institutet. Swedish and Finnish samples were analyzed at GIS and the subsequent joint analyses resulted in a deeper understanding of the complex genetic mechanisms of hormone metabolism and how this leads to breast and endometrial cancer.”

Experts examined SNPs that were classified as per their potential biochemical functions in the formation of estrogen. They also tested the collective effect of multiple SNPs within a group on breast cancer formation was assessed. They observed a positive link of breast cancer risk with the DNA variation of the genes. These genes were involved in the formation of estrogen, including CYP19A1 genes that produce aromatase enzyme.

GIS Senior Group Leader Dr Liu Jianjun shares, “Aromatase is used to produce estrogen from androgen in postmenopausal women. As estrogen exposure is the most important risk factor for breast cancer, inhibiting aromatase activity and thus lowering estrogen production has been commonly used to treat breast cancer in postmenopausal women. The current study advanced our understanding of aromatase by demonstrating that the modulation of aromatase activity by either DNA variation or pharmacological agents can both influence the development of estrogen-sensitive tumor in postmenopausal women. The convergence of genetic and pharmacological effects of CYP19A1 also suggested that other genes involved in the production of estrogen from androgen can act as potential therapeutic targets for treating breast cancer. In addition, the finding of this study raises the possibility that breast cancer can be prevented by blocking the production of estrogen through the use of an aromatase inhibitor.”

For a long time experts tried to associate genetic variation in the estrogen metabolizing pathway to the risk of breast cancer. Experts claim that for the first time they identified that there is a relation between polymorphisms in genes that metabolize estrogen and risk of both breast and endometrial cancer. Polymorphism in the aromatase gene, CYP191A1, control the inclination to breast cancer, strengthen the usefulness of aromatase inhibitors as chemoprophylaxis agents specifically for targeted subgroups of women recognized to have an augmented risk of breast cancer.

These finding were published in PLoS Genetics on July 1, 2010.